Sometimes, you read a recipe and it wrecks your head.

Case in point: while nosing around the the Idaho Potato Commission website (as you do), I happened upon this, a recipe for baked potato cookies with sour cream and chives. It fairly stopped me in my tracks, I can tell you.

It wasn’t that the recipe called for the use of mashed potato in a sweet, baked good. What with potato bakewell tarts, potato apple parcels and chocolate potato buns, I’m all over that one myself.

No, frankly, it was the chives.

Couldn’t get my head around it.

Neither could I get away from the fact that, in my never-ending quest to explore the far reaches of the possible, potato-wise, I was going to have to make some. The things I do for spuds, eh? 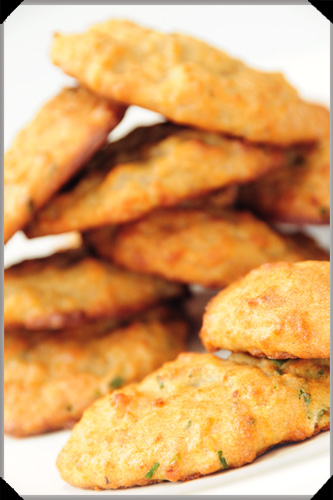 Yes, the cookies are sweet and the green flecks are chives

I followed the recipe more or less as written, substituting butter for margarine and yoghurt for sour cream. I did hedge my bets when it came to the chives, though, and only added them to half of the mixture (I mean to say, I wasn’t that optimistic about a good outcome). In they went to bake, while I waited and wondered. I wasted no time in downing several as soon as they were done.

They were moist (as I’d expect for something with that amount of mashed potato) and spongy (think kitchen sponge, not victoria sponge), fairly plain and not too sweet. Thing was, the ones with chives didn’t taste remotely chive-like and – though truth be told, there wasn’t that much of a difference – I preferred them to the ones without.

Seems I had made them, eaten them, but still not made sense of them.

Speaking of recipes involving potato (either with chives or without), if you’re a UK-based blogger, you may be interested in a competition being run by Love The Garden. Blog your best potato recipe for a chance to win a prize of £200 to spend at a restaurant of your choice. Full details here, closing date is the 16th of August.