If potatoes are my father, then apples are my mother.

And no, smarty pants, that does not mean that I am some misbegotten product of genetic engineering (the papple? the aptato?), I mean that there is no food I associate more with my Da than boiled potatoes and no greater sweetness than the Mammy’s apple tart or crumble.

Separate and individual, vegetable and fruit, they can, like parents, be happy cohabitants. Think potato pancakes and apple sauce. 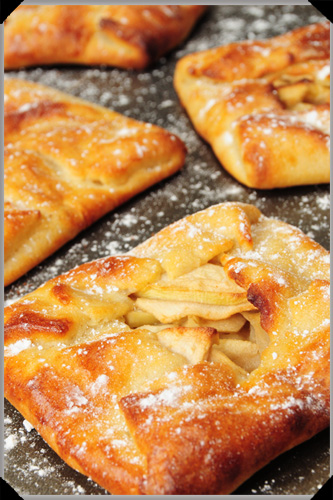 So, too, with these potato-apple parcels. Lofty apples wrapped in earthy potato pastry. 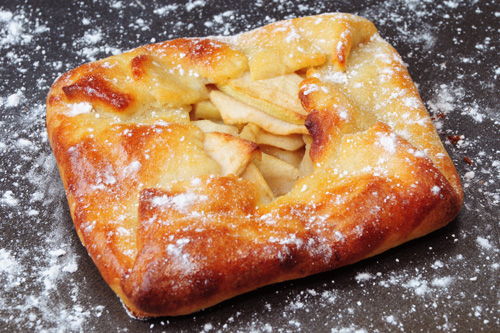 These little pastry parcels were adapted from a recipe for potato apple cake in Lindsey Bareham’s treasure trove of potato recipes, In Praise of the Potato. They are also very similar to the potato apple tart blogged about by Caroline from Bibliocook and which I have had on my must-make list for a long time.

To give a nutty, toffee-ish flavour to the apples, I tossed them with browned butter and muscovado sugar but you can use regular melted butter and brown sugar if you like, and of course you can throw in some cinnamon or whatever other spices take your fancy.

For the dough, you’ll need to start with some mashed potato. If that causes you any level of grief, I do recommend you nip over here for advice on mashing. Whatever else you do, I will ask that you remember to salt your water well when boiling your spuds for mash (or when boiling your spuds for any purpose), do let your boiled spuds dry off before you mash and, if you have it, use a potato ricer as it will make for a smoother potato pastry.