Spud Sunday: Defender Of The Spud

To borrow a phrase from the original super brat himself, you cannot be serious.

That was my response (and then some) to an invitation to participate in a so-called “un-potato fest”, which asks participant bloggers to spread, in a jocular fashion, the myth that potatoes are boring, in order to promote a box of (wait for it) instant stuffing mix.

I mean really, who in their right mind would ask me, of all people, to promote the supposed ability of an instant stuffing mix to heroically save us, every one, from the apparent mundanity of all things spud. A mix which, according to this post, contains, among many other things, high fructose corn syrup, MSG and a whole whack of salt. Charming.

Some, I know, will take up the call, and that’s their prerogative, of course. As for me, I’ll choose potatoes over a box of stuffing any day (but I rather suspect you knew that already). Spuds are truly versatile and sometimes even surprising beasts, as, I think, this potato bakewell tart will demonstrate. 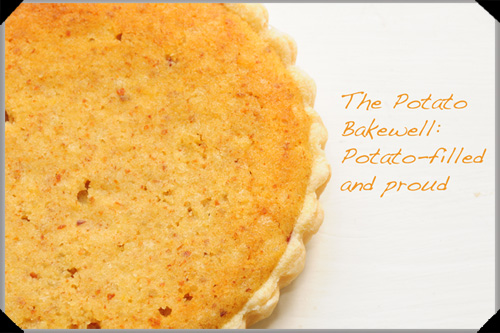 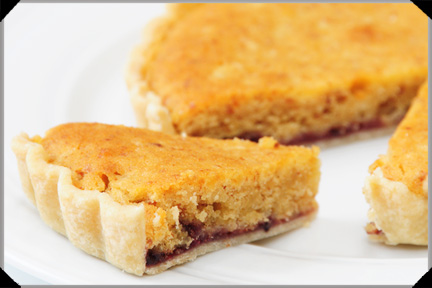 As with the use of mashed potato in other baked goods, the addition of potato here brings some additional moistness to the tart’s filling.

The idea for this originated with an old English recipe for potato “cheesecake” , which consists of pastry shells filled with a mixture of mashed potato, butter, sugar and nary a bit of cheese. To be honest, the original recipe really left quite a lot to be desired, so I added some egg and flour for structure and ground almonds for texture and flavour, resulting in a filling that was quite frangipane-like. From there, it seemed only natural to add a layer of jam, to make a kind of potato bakewell tart.

Do use a floury potato for the mash and have the cooked potatoes as dry as possible before mashing, as soggy mash will translate to a wetter filling. As the filling is quite moist and dense as it is, I find it works best spread in a fairly thin layer, so shallow baking tins are recommended.

For the tart shells: