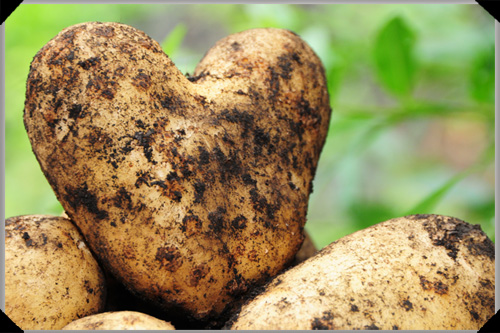 It’s a pity, of course, because the modest, workaday appearance of your average spud-on-the-street belies their superspud status – an endlessly versatile ingredient that doubles as a good source of vitamin C, potassium and fibre in a very neat nutritional package, and one that (you may just have noticed) grows well on our doorsteps. It’s, y’know, the kind of thing I’ve been saying for about seven years or so.

And if you’re still having trouble picturing spuds in anything other than a meat-and-two-veg suit or as the afterthought in the “and chips” scenario, then consider, say, the good-for-you salad below – bright and zesty and simple to make – or any number of others found in the Daily Spud repertoire, with further spudly ideas to be found at both www.potato.ie and www.lovepotatoes.co.uk. 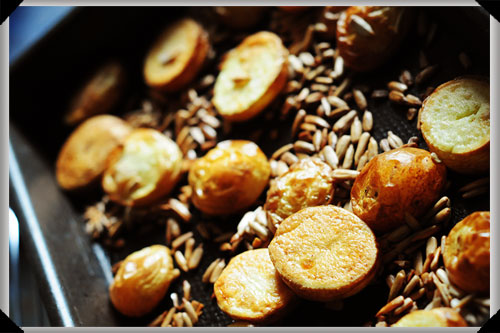 This is how it starts: sliced potatoes, roasted with sunflower seeds

To quote an old confectionary tagline, I think of this salad as “full of Eastern Promise” – Middle Eastern to be precise, because olive oil, lemon juice, parsley, allspice and chickpeas bring my tastebuds right back into Lebanese territory and the joy that it was to visit that country back in 2011. It is, however, considerably better for you than said confectionary – the potatoes give it substance, while the supporting cast provide brightness, colour, and contrasting textures. My sister – a seasoned sampler of spud creations over the years – said she could eat one of these every day. 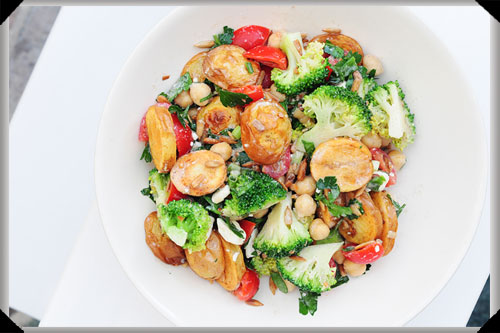 And if it seems like a lot of ingredients, it’s easily put together, with a lot of flexibility in its composition. Potato chunks are tossed in a little olive oil and quickly roasted in a hot oven along with some sunflower seeds, and then added to chickpeas, broccoli, feta, tomatoes and spring onions. It’s dressed with lemon juice, yoghurt and lots of parsley, along with some mustard and allspice. If you don’t have broccoli, use another crunchy green vegetable; if you don’t have feta, try goats cheese instead; no allspice? no sweat – leave it out or perhaps try another spice – some dried chilli flakes, perhaps.

As for the potatoes, use baby or new potatoes and slice each into two or three, or chop larger potatoes into bitesize chunks. The final textures will be different, depending on the relative flouriness (or dryness) of the potatoes, but should still – most importantly – taste good.