It is my habit of late to conduct Saturday mornings at home to the tune of BBC’s Saturday Kitchen.

This is an hour and a half of television programming which, each week, features cooking by two guest chefs and by host, James Martin, interspersed with archive footage from assorted other BBC food programs. A celebrity guest is on hand throughout the show to chat to and to cook for.

When Saturday morning rolls around, I’ll fire up the television and keep an ear on proceedings while I make coffee and whatever else takes my weekend morning fancy. Inevitably, my interest in the show varies, depending on the guests (cheffy and otherwise), on the dishes being cooked and on the archive clips that are shown (I have a definite fondness for the old Keith Floyd pieces which have been featuring lately).

I made a particular point of tuning in last Saturday, as the line up included Thomas Keller, founder of not one, but two 3 Michelin-starred establishments, The French Laundry in Napa Valley and Per Se in New York, and considered to be one of the finest chefs in the world. He’s not given to making television appearances, and you could tell that there was a mixture of excitement and nerves at having him in the studio on the part of both James Martin and Tom Kitchin, the other guest chef and no stranger to Michelin stardom himself.

END_OF_DOCUMENT_TOKEN_TO_BE_REPLACED 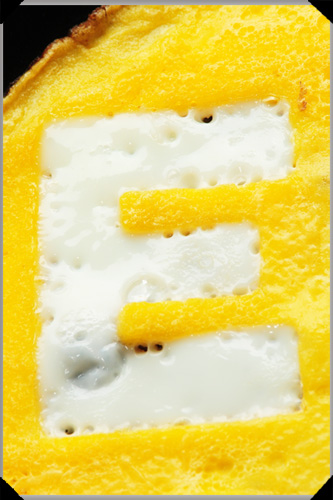 E is for Easter, E is for Eggs

Spell it with food.

That was the mission for those who chose to accept this year’s Eating Your Words Challenge. I chose, as you may have guessed from the picture above, to spell it with eggs. Bizarrely, I have Yellow Tail wines to thank for the eggy inspiration and you may very well end up with reason to thank them too.

END_OF_DOCUMENT_TOKEN_TO_BE_REPLACED

But It’s A Tradition…

You may ask, how did this tradition get started? I’ll tell you! I don’t know. But it’s a tradition…

In these lines from the opening of Fiddler on the Roof, the character Tevye makes reference to the “just because” nature of all kinds of traditions. Doing things just because that’s the way they’ve always been done and kindof forgetting why.