Spud Sunday: Of Spice And Spud

It’s a conspiracy. No doubt about it. A conspiracy I tell you.

The fact of the matter is that London-based Michelin-starred chef Atul Kochhar is being thwarted in all of his attempts to meet me.

First, it was the January snow that scuppered travel from the UK and resulted in the cancellation of Atul’s one day course at the Dublin Cookery School, which I was due to attend. Then it was the preponderance of volcanic ash in the airspace hereabouts that meant he was unable to travel for the rescheduled date this weekend.

Much admired for his masterful use of spices, I had really hoped, by now, to be in a position to reveal Atul’s thoughts on the subject of spices for spuds, but there are forces at work that have determined otherwise. Perhaps it is the case that Atul is simply not ready to meet me yet – it’s a naturally big step in any chef’s career – but I rather fancy he can handle it.

And so, while I wait to hear of a new date for my tuition in the ways of Indian spicing, I content myself with using Atul’s rather wonderful book, Indian Essence, as my spicy guide. These potatoes with cashew nuts are a great example of where that can lead. END_OF_DOCUMENT_TOKEN_TO_BE_REPLACED

END_OF_DOCUMENT_TOKEN_TO_BE_REPLACED

You could eat a mountain of those…

So proclaimed resident sis, having started to munch through a plateful of spicy lunch spuds. Said spuds were more-ish alright. It was a close run thing as to whether I would manage to take an acceptable photograph before having eaten them all myself. Lucky for you I did, huh? 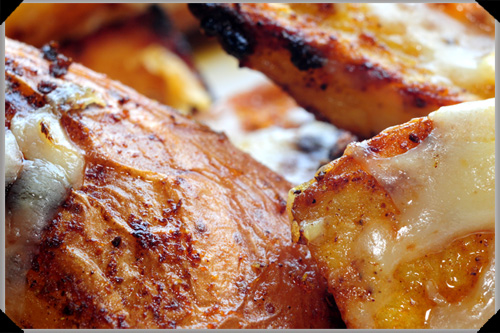 How many could you eat?