If there’s one thing I have learned about spuds over the past 6+ years, is that there’s always some new spud thing to learn.

Be it natural curiosity, or because – slowly and imperceptibly over time – I have become attuned to spud wavelengths, or because others, knowing my predilection for all things potato, pass snippets my way, there is, in my head, a steady accumulation of spud stuff. The recent few months – though they may have been largely quiet on the blog front – have been no different.

There was the friend from Mayo who, a while back, asked me to give him a call, if I were not “too busy scratting spuds.” When I rang later, he explained that in the ’70s – and, I’d imagine for many years before that – when farm workers from the West of Ireland would travel to England for seasonal work, locals would say that they were “scratting spuds in Scunthorpe.” Scratting meant digging potatoes by hand – not to be confused with apple scratting, which is the process of grinding apples up before fermentation into cider – but technology and the times we live in mean that “scratting spuds” is a phrase – and an activity – that has fallen into disuse.

On the other hand, modern times have brought us new ways, not just of harvesting, but of growing potatoes and of bending them to breeders’ wills. An article in the Observer last October told of a Dutch project – winner of an award under the USAID Grand Challenges for Development initiative – which is investigating the possibility of using salt-water to grow potatoes (and other crops).

Given the huge energy and expense expended worldwide on desalination, the work has, the article states, the potential to be “a real game changer.” Dr. David Shaw of the Sárvári Research Trust in Wales, meanwhile, points to the fact that they conducted trials in 2011/2012 looking at the differences between potatoes grown using diluted seawater and tap water, with indications that the use of seawater had a positive effect on both yield and late blight control, but it’s research that he says has been underfunded and undervalued too. 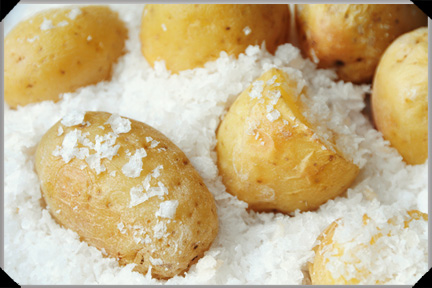 Salt & Spuds: a combination no longer limited to cooking – as here, with salt baked potatoes; these days, salt can be applied to the growing of spuds too

I also read with interest a few weeks later an article in the New York Times on the latest GM spud developments, with the J.R. Simplot Company introducing Innate, a potato better adapted to the rigours of mass production and processing, designed, as it is, to resist bruising and to reduce the development of acrylamide – a suspected carcinogen – during frying (a second generation of the Innate potato, we are now told, adds late blight resistance). How the potato will fare remains to be seen – McDonald’s, by all accounts, are not that keen – but there’s no doubt that it is a thoroughly modern potato adapted for the problems of a thoroughly modern world.

Modern research also, of course, endeavours to tell us how best to eat our spuds (or if, according to some, we should eat them at all). Dr. Michael Mosley, for example – he of BBC’s ‘Trust Me I’m a Doctor’ and author of The Fast Diet – would maintain that potatoes are better eaten with butter than without. When he said as much during an interview on Marian Finucane’s RTE radio show last year, I suspect that an entire population – Marian included – mouthed a little ‘hurrah’ in response.

The basis for the assertion, by the way, was that the addition of fat slows the absorption into the bloodstream of the sugars that result from the digestion of the starch in a potato, so the addition of butter results in less of a spike in blood sugar levels. Meanwhile, a study, widely reported on this week, indicates that dietary guidelines on fat issued back in the ’80s, effectively demonising butter and dairy, were misguided and “lacked any solid trial evidence.” I, in my unscientific way, would maintain that potatoes and butter – when not consumed to excess, of course – have always been good for you. I think anyone who has ever spent time scratting spuds would agree.