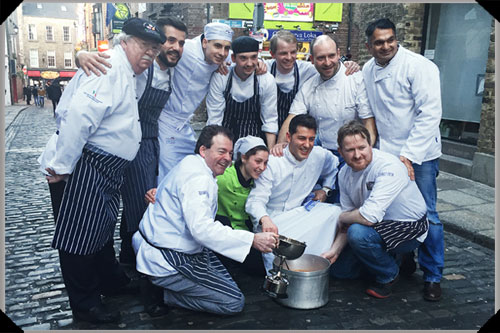 There’s no use messin’ with coddle – coddle is coddle

The coddle contenders – prepared by chefs from 9 different Temple Bar establishments – ranged from the utterly traditional to the ultra modern: it was variously deconstructed, reconstructed, and featured a great many more pig parts than usual. In an unexpected blast from Ireland’s culinary past, John Howard – he of legendary Dublin restaurant Le Coq Hardi, frequented by the great and, some would say, not so good back in the day – was drafted in by the Oliver St. John Gogarty team: “There’s no use messin’ with coddle,” he told us judges as we sampled his classic rendition, “coddle is coddle” (which, he also told us, means no carrots, if you please). Seemed clear that there was no use messin’ with John Howard either. 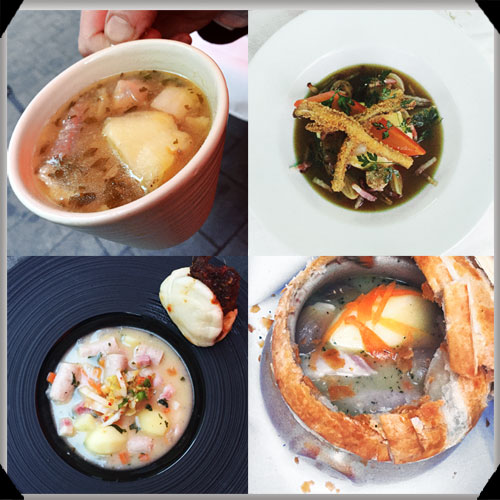 A selection of the coddle competitors:
Top left: The Boxty House pigged out with their version, starting with stock made from pigs head and featuring black pudding sausages, Lumper potatoes and Stonewell cider; Top right: The carefully constructed winning entry from The Larder topped off a flavourful broth with crispy pigs ears; Bottom right: Oliver St. John Gogarty‘s coddle was – apart from a few non-traditional bits of carrot – a classic rendition, using some of Jane Russell’s sausages and a puff pastry lid; Bottom left: The Chameleon‘s version may have looked fairly traditional, but was topped with kimchi and came with a pork bun on the side;

In the end, it was the prettily plated and generally cheffed up version of the dish presented by The Larder – complete with its topping of crispy pigs ears – that claimed the inaugural Masters of Coddle cup. But what was perhaps surprising – but perhaps not, to the coddle lovers out there – was that the traditional entries more than held their own, proving that, with good sausages and bacon, and a few good spuds, coddle is a winner every time.

To see how traditional coddle is made, watch Pádraic Óg Gallagher in action below.