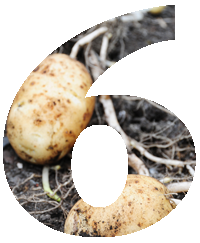 The launch of National Potato Day, as sponsored by Bord Bia, the Irish Potato Federation and the Irish Farmer’s Association, included a lunch consisting of seven potato dishes – from beef and potato stew to potato and onion pakoras – identified as the most popular recipes on Bord Bia’s promotional spudsite, potato.ie. I – and no bother to me – ate them all. 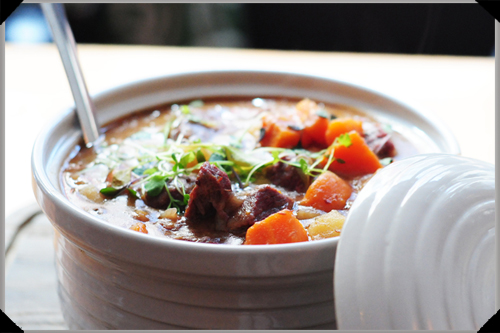 Beef and potato stew – one of the more traditional recipes from potato.ie’s top 7,
as promoted by Bord Bia as part of this year’s National Potato Day

The lunch was followed by the harvesting of a cross section of varieties from the heritage potato collection of Dave Langford and Dermot Carey, as grown on behalf of Gallagher’s Boxty House by Andrew Douglas of the Dublin Urban Farm project. Having grown around 160 varieties from the collection last year on a city rooftop, that number and more were grown again this year, and toured at various festivals as part of what Andrew called the Thank Potato project. Pádraic Óg Gallagher, meanwhile, hopes to make his harvest of multifarious potato varieties an annual event. 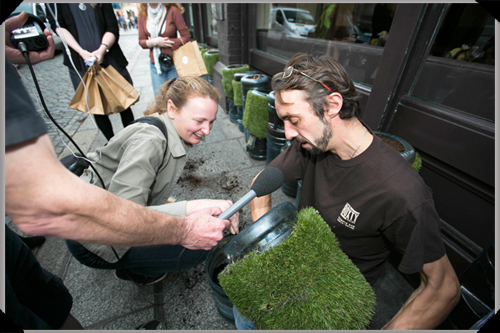 There I am, harvesting potatoes from upcycled water cooler bottles outside
Gallagher’s Boxty House, with Andrew Douglas of the Dublin Urban Farm and Thank Potato projects.
(image courtesy of Andres Poveda Photography)

When it came to my turn to harvest, I chose an unfamiliar-to-me variety called Irish Peace (and you can listen to my harvesting cameo on RTE countrywide on the RTE radio player, from about 35 minutes in; the earlier part of the program, about the difficulties being experienced by vegetable growers here, is worth a listen too).

And so, having promised on national radio to give my Irish Peace potatoes a whirl and write about my findings, I can say that they were what you would call a little wet – definitely of the waxy persuasion, in other words – while the flavour, a little nutty I thought, was not at all bad. I later discovered, via the European Cultivated Potato Database, that the variety was, perhaps unsurprisingly, bred in Northern Ireland and first listed in 1973, in the early years of the Troubles – it is thus nothing if not an optimistically named spud (and, I might suggest, a variety that would be suitable for those convenience packs of baby potatoes that are becoming ever more popular). 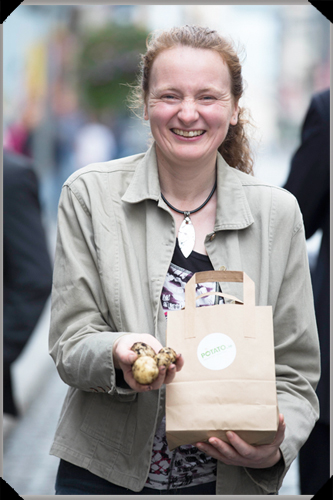 There was much else that went on during National Potato Day, but I shall finish with one of the more interesting, which was an interview that Caitríona Redmond did on the Sodshow on Dublin City FM with John Weakliam of Irish charity Vita. They discussed the charity’s work in addressing food security issues in Ethiopia, and elsewhere, with their Potato Centre of Excellence – it’s a topic about which I’ve written before – while Caitríona also spoke with Eritrean native Smret, who describes how, in her country, potatoes are seen as a treat to give children. All of which goes some way towards demonstrating that spuds are a very complex carbohydrate indeed.

listen to ‘The Sodshow Meets John Weakliam of Irish Charity, Vita’ on audioBoom