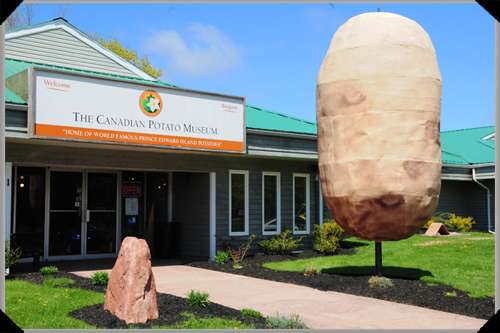 With origins as a community museum started around 1967, the establishment was developed into the potato museum in the 1990s and – with a great deal of voluntary effort from the likes of the aforementioned Stanley MacDonald and, he adds, no small amount of luck – it now extends to around 14,000 square feet. It incorporates the community museum, along with a collection of artefacts from the PEI potato industry through the years, as well as the comprehensive ‘Amazing Potato’ exhibit – inherited from Canada’s National Museum – on the broader history of the spud, plus a gallery of antique farm machinery, some dating from the 1850s. 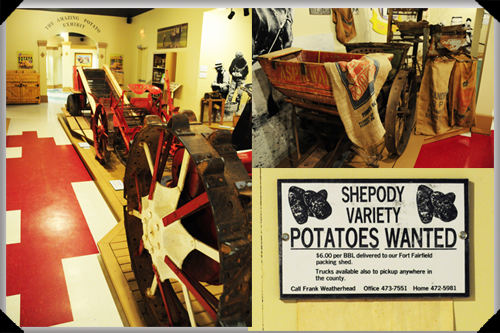 Around the PEI potato museum 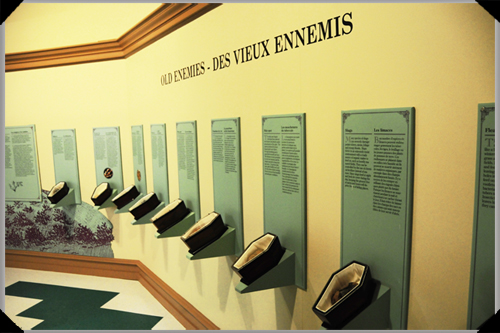 Miniature coffins make for a somewhat grim but, nevertheless, effective means of displaying
information about the many pests and diseases which can wreak havoc with one’s spud crop

They have, in the last three years, added a café to the museum – “best thing we ever did,” says Stan, as it brings in locals who might not otherwise have thought of stopping by – and features dishes made with PEI potatoes, from potato soup and baked potatoes to the Canadian classic of poutine and even potato ice cream (which I regretfully did not get to try). 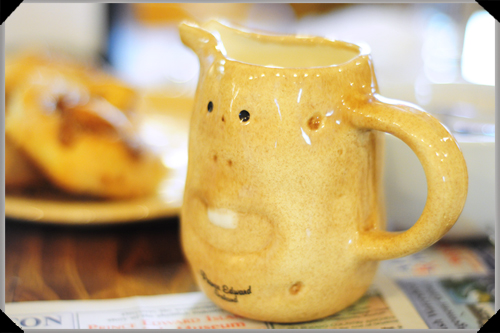 A spud jug for the milk at the Potato Museum café. Obviously.

The café also features potato fudge, by which I was also – somewhat predictably – intrigued, and Joanne from the museum’s café kindly mixed up a batch for me while I was there. As it turns out, there was no great mystery to it but, rather, a small amount of mash, a lot of chocolate and a considerable amount of sugar. One to play with for the spud repertoire at home. 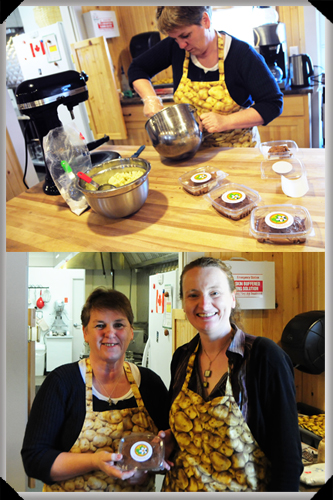 Joanne at the Potato Museum café whips up some chocolate potato fudge & does the ceremonial presentation of same to my good self. Spud aprons de rigueur, naturally.

This is fudge as inspired by that which you can see being made – as I did – at the Canadian Potato Museum on PEI. The recipe used at the museum is taken from the book One Potato, Two Potato, a collection of potato recipes by PEI resident Janet Reeves, and very simply adds melted butter and chocolate, along with some vanilla, to a small amount of mashed potato and a lot of icing sugar. The mixture is then chilled in the fridge to firm it up. 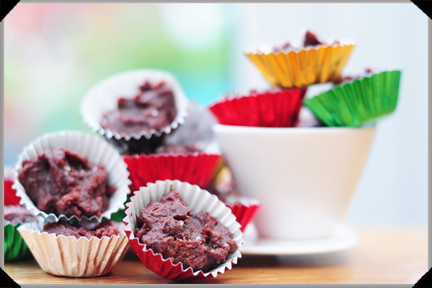 I have used the same method here as in the original but I have adjusted the relative quantities of the ingredients, using more potato and considerably less icing sugar. The result is not as sweet – though still plenty sweet enough – and has a softer, fudgier texture than the museum’s fudge, and is best kept in the fridge. As an optional extra, I’ve added a very light sprinkling of good quality salt crystals, which gives the fudge an extra little lift.

And to answer the usual question that people have about sweet things that feature potato as an ingredient, there’s a little graininess of texture but no, you don’t taste the potato – the chocolate and vanilla take care of that. Do make sure that the potato is well mashed, though – or better still, riced – so that you don’t end up with any stray lumps of spud.