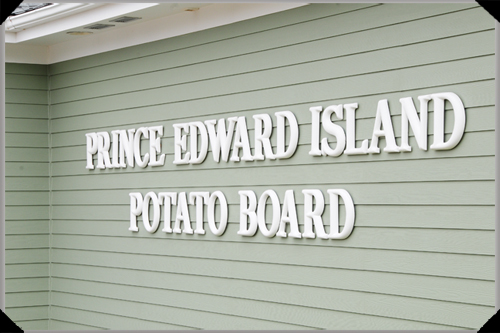 And so, at the Potato Board’s offices in Charlottetown, I met with Kendra Mills, the board’s Marketing Director and my head was abuzz by the time I left, almost 2 hours later, with talk of weather conditions and blight, of land use and breeding, of processing and exports, of history and the future and – somewhat unexpectedly – of Roosters and Lumpers too.

The board, funded by a levy-based system, works on behalf of the island’s potato farmers, helping to negotiate contracts and support generic marketing of PEI potatoes. And while Kendra talked in acres and hundredweights and of family farms, make no mistake but that – with a quarter of Canada’s potato production to its name – spuds are big business on this small island (with 90,000 acres producing 25 million hundredweight of potatoes – give or take 1.1 million tonnes – it puts the Irish potato industry into perspective – figures from the Irish Central Statistics Office (CSO) indicate that Irish potato acreage is probably around a quarter of that, producing perhaps 20% to 30% of that volume). It’s an industry with both interesting local quirks and surprising global reach, and faces issues familiar to spud growers everywhere. 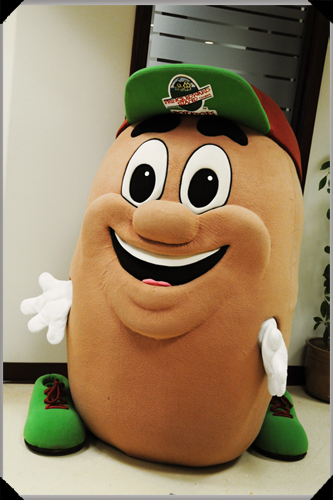 Yup, that would be Tate, the PEI Potato Board mascot

The taste here is for dry potatoes, especially among the older generations; if they get potatoes that are too moist, they’ll call!

So I was told by a Potato Board staffer who handles their consumer response line (that there is even a number you can call if you have problems with your spuds should be evidence enough of the potato’s status on PEI). The taste for spuds of a dry, floury sort – particularly as evidenced by the summertime favourite, the Irish Cobbler – is not altogether surprising, given the large number of people on the island claiming Scots and Irish heritage. What might raise an eyebrow, however, are some of the laws on the island governing potato production, as with PEI’s provincial crop rotation law which states that you can only farm potatoes once every three years on the same piece of ground. Though it enshrines the good practice of rotation, and was instituted to protect island farms, rivers and the environment, it is controversial among farmers because of the additional amounts of land which they must have available in order to support a certain volume of potato crop. 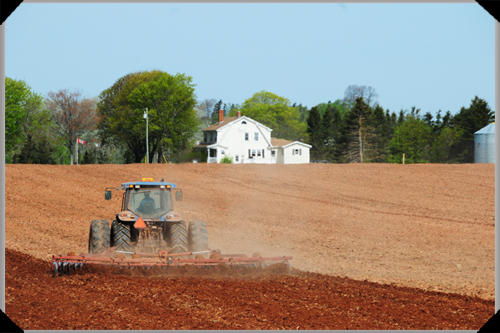 Land use laws on the island also stipulate that a single person can own a maximum of 1000 acres, and as a corporation, that maximum is 3000 acres. Though the last 30 or 40 years have seen consolidation in farm size, with small farms selling out to create bigger units – a pattern common across Canada and elsewhere, as is the change from mixed use farming to single focus – the farms themselves have almost entirely remained as family enterprises. For the some 250 potato farming units on PEI today, typical farm size is 350-400 acres and 98% of those remain family farms. How those farms run, however, is changing dramatically – Kendra described this as being a period of real transition and change for the potato industry on PEI.

It was not that long ago that we were storing potatoes in our basements and loading 75lb jute bags by hand onto railcars and ships, now we’re planting with GPS – in one generation, it’s changed so drastically. It’s kinda neat, y’know. 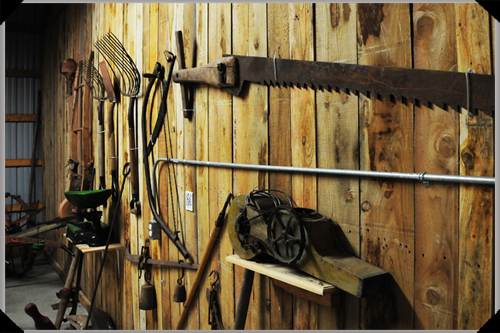 Old farm implements at the PEI Potato Museum:
things have moved on considerably since these were in vogue

Much of the change in the potato industry has been precipitated by the shift in focus in the last 30 years or so from production of fresh and seed potatoes to producing potatoes for processing, which now accounts for 60% of production, and the majority of which is for Cavendish Farms, who have major processing plants on the island. 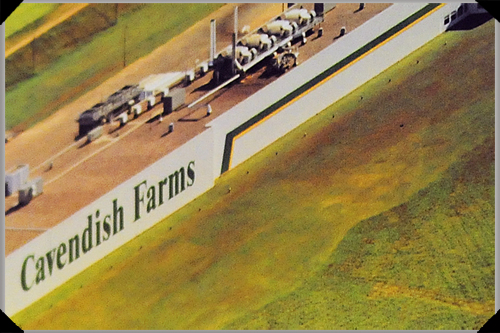 Potato processing giant McCain’s also have a presence, though it’s relatively small, while potatoes are also grown under contract for Lay’s potato chips (and you know by that I mean crisps). The nearest Lay’s plant is on Nova Scotia, though PEI potatoes regularly, and in quite some volume, travel further afield than that, I discovered.

We export potatoes to 30 or 40 countries any day of the week.

Kendra quoted the example of Terry Curley of Monaghan Farms – and yes, there is Irish ancestry there – who has developed the island’s business with Lay’s to the point that containers of raw potatoes are now shipped on a daily basis to Indonesia and Thailand for local processing into chips (yeah, crisps). Though it would appear to defy logic to do so, it’s a reminder that potatoes are a huge commodity worldwide – and the processing industry one that is conducted on a global scale with big international players. As an island on the eastern Atlantic seaboard with good port access and a reputation for quality product, PEI is well positioned to play a global part.

But it’s not all a bed of roses. PEI suffers from the common western malaise that is the decline in consumption of potatoes, down in Canada, Kendra said, by about 50% since 1996, and for reasons that are all too familiar: immigration promoting tastes for different starches and grains, the desire for convenience, and myths about potatoes being fattening. We got to talking about Rooster potatoes, which are beginning to be grown on PEI. Though Roosters are the default potatoes in Ireland, they have acquired somewhat more of a cachet in the UK and elsewhere, having been cleverly (and expensively) marketed by Albert Bartlett, and were recently launched in the United States with Walmart as exclusive retail partner. Kendra speculated that a launch in Canada with such premium product positioning and marketing might help to push up sales of potatoes generally – a case of Roosters to the rescue perhaps. 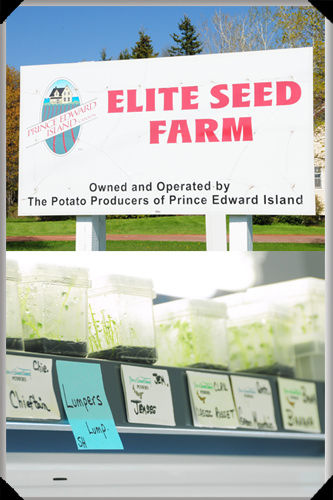 I might not have believed it if I had not seen it with my own eyes:
Lumper plantlets at the Elite Seed Farm, PEI

And while I might have been mildly surprised to discover those Irish-bred Roosters on PEI, I did, as I took my leave from the Potato Board’s offices, do a distinct double take at the mention of Lumpers, the potato which famously succumbed to blight at the time of the Irish Famine. And yet, on a visit, the following day, to the Potato Board’s Elite Seed Farm, where they keep a potato seed bank and do propagation of seed stock from the plantlet stage, I saw Lumper plantlets growing. Proving that it’s a very small potato world, Mary Kay Sonier, who runs the seed farm, had crossed paths with Lumper revivalist Michael McKillop of Glens of Antrim Potatoes, seed material was acquired and thus, out of interest and curiosity, an old variety, with a blighted history, had, like many’s the Irish immigrant before it, found new life on the other side of the Atlantic. PEI was proving to be full of spud surprises.