The invitation was for lunch with Neven Maguire at the Aviva Stadium.

I pictured myself and a capacity stadium crowd being fed personally by Neven, and it seemed like that might be a stretch – even for one of Ireland’s best loved chefs and quite possibly the nicest man in the Irish food business. As it turns out, the crowd was rather smaller – more like 15 than 50,000 – and (get me!) we were lunching in the intimate surrounds of a corporate box, with the breadth of the Aviva as a backdrop, and Mr. Maguire for company (as my sister later put it, I had gone from nought to Neven, and in only five (blogging) years too; jammy was the other description that sprang to mind, which was exactly how it felt to have homemade jammie dodgers à la Neven round off the meal). 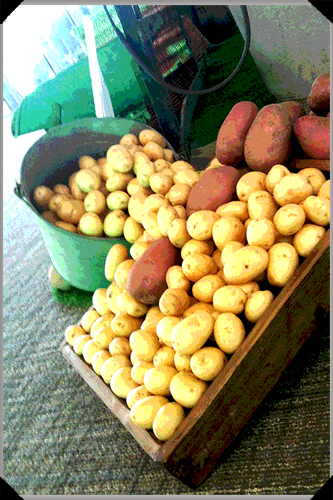 A display of spuds lined the corporate corridors at the Aviva Stadium:
I guess somebody told ’em I was on my way through… (and yes, before you ask, there were spuds – in potato gratin form – on Neven’s menu too)

My visions weren’t entirely without foundation, however. The lunch accompanied the announcement of a partnership between Neven and Compass Group Ireland, whose 4,000+ strong team cater to the food needs of establishments across Ireland, serving a rather considerable 100,000 meals – that’s two Aviva Stadium’s worth – a day. It’s quite the contrast to Neven Maguire’s usual surrounds of MacNean House & Restaurant in the village of Blacklion, Co. Cavan, which does around 85 covers and employs 55 people (and that, Neven will tell you, “is nearly half the village”) – how, then, would the bould Neven divide himself across so many additional plates? (says you, he’d need a lot more spuds for a start) 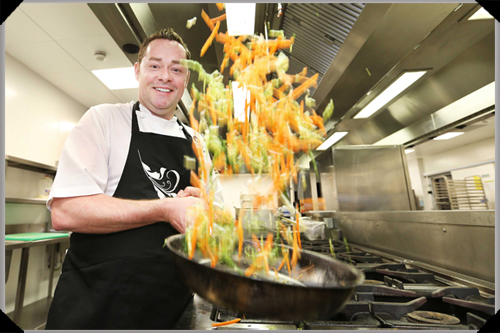 The plan – as outlined at the lunch by Fiacra Nagle, M.D. of Compass Group Ireland – is for Neven to work with the organisation across the country, promoting locally sourced produce and Irish suppliers. Most readily visible will be their collaboration on the hospitality offering at the Aviva Stadium which, among other things, will mean a premium level MacNean pop-up on match days – good news if you’re a 10 year ticket holder with access to that level – while corporate boxes will have Neven-inspired menus. Neven and his team will partner with the group’s chefs – under Executive Chef Mark Anderson – to deliver the goods, while Fiacra Nagle added that there would be Neven touches at all levels of their Aviva catering. 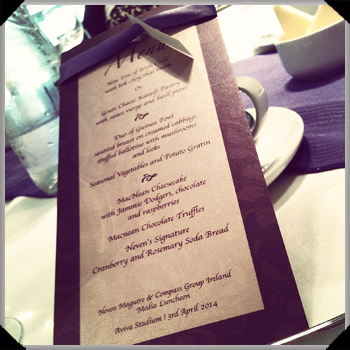 A taste of (premium-level) things to come:
a Neven Maguire menu served up at the Aviva

It was clear at the lunch that both sides were excited at the prospect of the partnership, though bringing a MacNean menu, if not to the masses, then at least to significantly more punters than usual, would mean changes. As Neven put it: “our food [in the restaurant] is quite detailed; we’ll be doing a lot that’s similar here, but simplifying.” Whatever the nature of those simplifications, they wouldn’t – if our lunch was anything to go by – involve any compromise on quality from a man whose restaurant is beloved by so many (to say nothing of being fully booked for every weekend from now until the end of this year). It is time, though – and the feeding, in due course, of several thousand match-goers – that will ultimately tell, but for now, the Cavan man is unphased by the change in scale: “it’ll be great fun; it’s a beautiful place, and working with a great team – will just be cooking for a few more people than I’m used to.”