If potatoes had personalities, you might describe them as a patient lot. Forget to dig them in autumn and they might surprise you come spring with their belated bounty.

And so it was this weekend. Though the potato calendar may have pointed to planting – and recent Potato Days, such as those at the Organic Centre in Co. Leitrim and at Sonairte in Co. Meath, provided both the spur to sow and the seeds to sow with – it was harvesting that was the name of this Spud Sunday’s game. 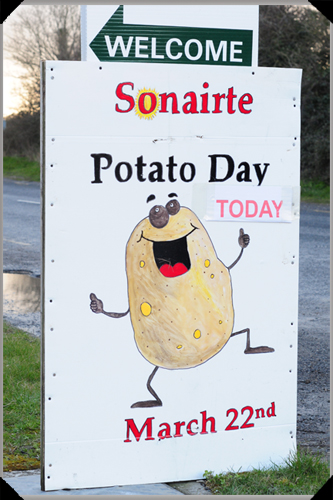 A rather cheery looking spud welcomed visitors earlier this month to this year’s edition of Potato Day at Sonairte in Co. Meath, with all of the usual spud suspects in attendance

When, as a precursor to committing seed potatoes to soil in my Mother’s garden, I set out, welly-booted, on my weekend reconnaissance mission, I did not expect to have so soon a reward for my back yard labours. 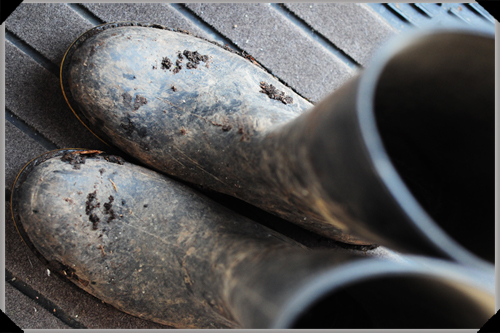 The boots of the spud digging trade

But as I poked about in a thickly weeded plot that had, last year, been home to a crop of British Queens, there, beneath the matt of greenery, were a great deal of most royally welcome spuds – several plants of same that had been missed entirely by autumn’s fork and spade. Though starting to sprout enthusiastically, they would still be plenty good enough for both plate and palate (and palace too, I’ll warrant).

What with the digging and pulling of weeds – and the matter of this year’s planting still to be taken care of – it wasn’t a free lunch, exactly (or free lunches, even), but the finding of forgotten Queens was fabulous, all the same. 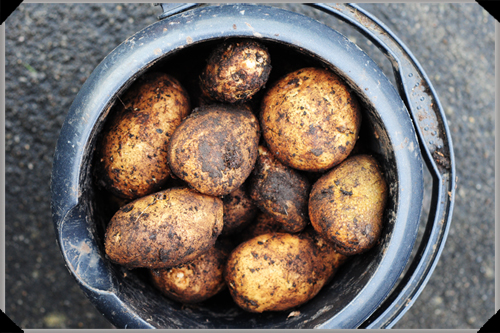