Media reports following the conference, such as this one in the Indo, latched on to the predicted 40% drop in our potato consumption over the next ten years, as quoted by Bord Bia’s potato specialist, Lorcan Bourke, and on Thursday I was quizzed on the matter myself on Radio Kerry’s Kerry Today program with Jerry O’Sullivan (the summary of what I said? no, this is not a new story and yes, spuds are great).

As alluded to earlier, I have also, somewhat coincidentally, been appearing in a spud (and Kerry) capacity on Irish tellyboxes over the past week or so. An episode of a new series, Gliondar, which airs this Monday evening, Feb. 24th, at 7.30pm on RTÉ1, follows the fortunes of three of the competitors in last year’s Spud Off Mór in West Kerry. In my capacity as judge at the event, I was called upon to say a few words on screen, which featured in this promo for the series (and no, there are no prizes for guessing which one is me).

The promo for the Spud Off episode shown at the top of the post, meanwhile, gives you some idea of just how seriously this potato judging business is taken (and you can read all about my own adventures at the glorious Spud Off here).

One of the points made in my I-love-spuds spiel on Radio Kerry last week was that – controversial though it might seem to say it – we Irish do not, in fact, have the monopoly on potatoes (you would, at times, be forgiven for thinking otherwise). Spuds are grown and eaten throughout the world, and there’s no reason why we can’t borrow a few ideas here and flavours there when it comes to spicing up our own potato repertoires (potato promoters take note). This recipe is a case in point. 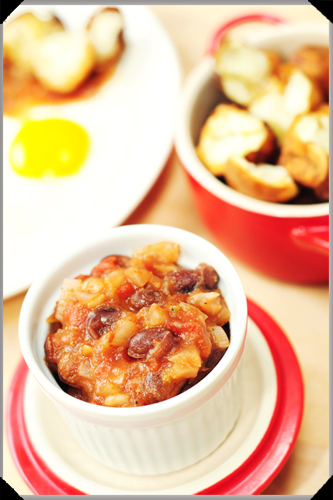 It’s a kind of cross between patatas bravas and heuvos rancheros, with Indian spicing (so it’s either terribly International or terribly confused). The potatoes are simply roasted whole (if small) or in large chunks and the accompanying sauce is made with black beans – the South American kind – as well as tomatoes, onions and ginger. The same sauce works well made with chickpeas instead of black beans, and the whole thing works well when served with a fried egg. And if you should – shock, horror – feel the need to forego the potatoes, the sauce can also be eaten with your choice of rice, naan breads and either corn or wheat tortillas.

Using tinned beans or chickpeas, of course, makes this very convenient. If you prefer to use dried beans or chickpeas, you’ll need about 100g and they should be soaked and cooked first (as per this black bean recipe or this chickpea recipe, respectively). If doing so, reserve some of the cooking liquid to use here.