Sunday, January 19, 2014 / Daily Spud
You may notice that today, for a change, I am about meat and not potatoes.

I started reading Rachel Laudan’s Cuisine & Empire the other day. It is, as the title might suggest, epic in range, tracking the spread of key cuisines across the globe in what is a broad, sweeping history of cooking. 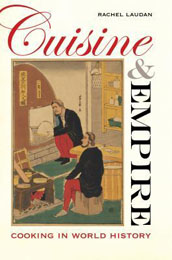 A book to sink your teeth into:
Rachel Laudan’s Cuisine & Empire

A dense, scholarly tome – think small fonts, few pictures, and reams of references – it’s not what you’d necessarily want to skim through over your morning cornflakes but, to be honest, its solidity and substance make a change from the day-to-day scatter of information delivered and consumed in tweets and sound bites. And despite ranging across countries far and centuries wide, it brought to mind something closer to home – a visit I made in December to Higgin’s Butchers in Sutton. 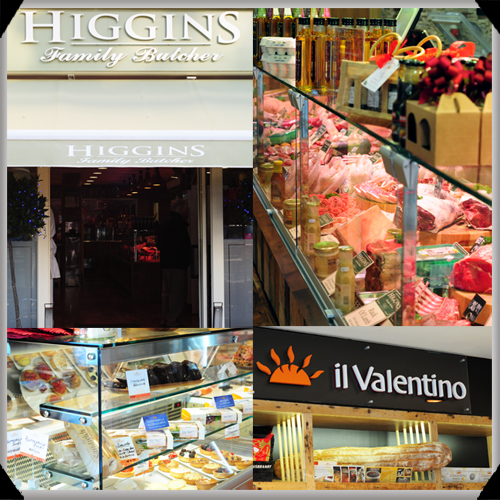 Laudan’s book discusses, among many other things, the wheat-and-meat cuisine which dominates in the Western world especially. Its most iconic modern embodiment is the American hamburger (and spuds, in the form of French fries, play a supporting role), but bread and beef have been bedfellows for many centuries. And they have partnered once again at Sutton Cross, where the Higgins’ swish premises now hosts an outpost of Il Valentino bakery. The result is a lot more than just burgers and buns. 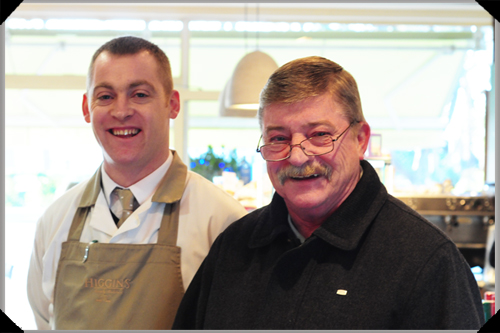 Rick Higgins and his father, Tony – two of the four generations of Higgins Butchers

Butchering was always in us, literally in the blood

Though it doesn’t have the span of an empire, exactly, Higgins Butchers is a family enterprise that has its own sweep of history spanning four generations – Rick Higgins is the present incumbent, though father Tony and uncle Tom – a former president of the Master Victuallers Association – still keep an eye on proceedings. With his father and uncle having previously run a shop in Sutton for about 30 years, it was Rick’s initiative to reopen there last year, next door to the site of the old shop which, in its time, had been one of the busiest in Dublin. 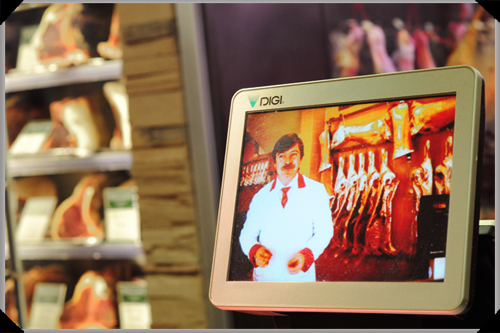 A screen on the counter shows a younger Tony Higgins,
behind another, older counter in their original Sutton premises

People are coming in, sayin’ ‘me neighbour told me about your pork chops and rashers.’

What you experience when you enter the new premises is a melding of old and new. Here is a business that harks back to traditional butchery – you will see pork chops and rashers complete with fat and rind, and carcases that hang at the back of the shop – but it also looks forward – those carcases do their dry aging in a fancy-looking refrigerated cabinet, while the Higgins, junior and senior, assure me that, be it crocodile or camel, whatever meat you want, they can get. An impressive game cabinet – with wild boar, guinea fowl, rabbit, kid and venison, among others – shows that they mean business. 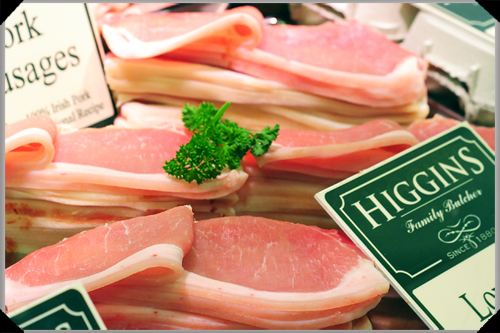 Rashers. With the rind on. Remember those?
Pork chops have the rind on too.
…but Messrs Higgins & Co. will happily remove it, if that’s how you roll

And then, thanks to Il Valentino, there’s the latte that you can have while you wait, along with a selection of cakes and continental breads (making it entirely likely that, when you leave, you do so with the makings of a sourdough and steak sandwich); the shop also carries a selection of Italian wines and some South American specialities, like yerba mate tea, which Rick gets in for the Brazilians and Argentinians who come in for cuts of beef that they can’t get elsewhere. 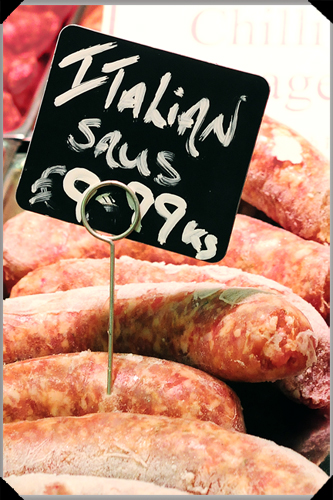 Italian sausages, one of the 15-strong sausage collection made inhouse – which also includes sausages made from duck, veal and lamb; dry curing of hams & rashers is likewise done on the premises

There’s not too many of us left, not around Dublin anyway

Proper butchers, that is. Rick tells a cautionary tale of a person behind a butcher’s counter in a supermarket who’d had a total of seven days training. “To me that makes a mockery of who we are and what we do,” he says.

Rick’s approach is to compete with the multiples, not on price – leave that to the 3-for-10, pre-packaged kind of outfits – but by doing things the supermarkets can’t do. Higgins deal directly with a small, local abbatoir and their staff includes five butchers with from 5 to 30+ years experience (Terry, Rick jokes, has been a butcher for about 200 years). They also have a first year apprentice who will spend four years learning the how and why of the butchering trade. Others want to learn too – local schools have asked if they can bring their transition year students in to see the butchers break beef, and to explain what cuts are what and where they come from. It’s something of solidity and substance that they’re not going to learn in a tweet or a sound bite, and they’ll be all the better for it. 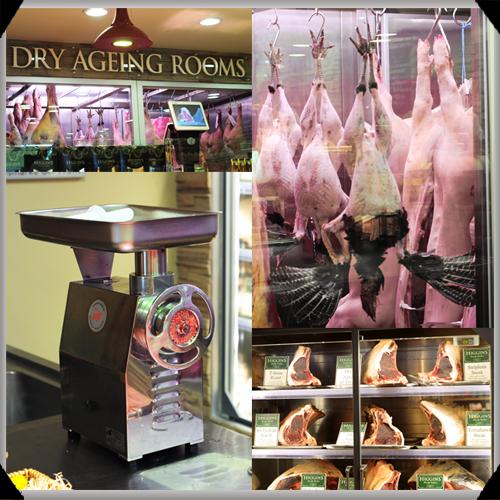 There’s the beef. And the turkey. And the pork.Carcases – including some turkeys in pre-Christmas mode – seen hanging in temperature controlled cabinets at the back of Higgins’ shop. Steaks, dark red from dry aging, can be cut to your required thickness, while mincing and sausage making happen on the counter, where you can see exactly what does – and doesn’t – end up in the final product.