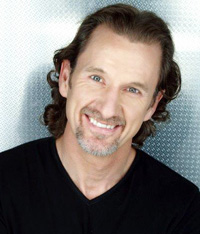 Unsurprisingly, Paul has a lot to say about restaurants and Belfast and Irish food, and it was my pleasure, a number of weeks back, to chat with him about all of those things, and about Christmas too, and – inevitably – potatoes. He is, as I discovered, a man who is very particular about same. 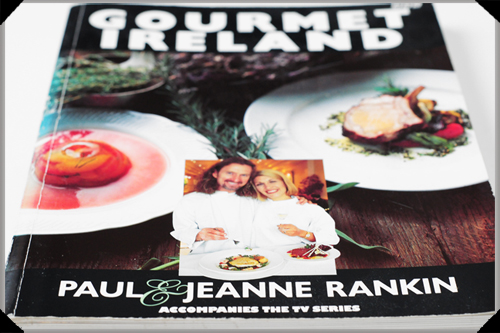 My first encounter with Paul Rankin was by way of the 1994 BBC series, Gourmet Ireland – this, the accompanying cookbook, has been in my Mum’s possession since. The book (and series) were ingredients-led, with recipes inspired by the raw materials to be found throughout the island of Ireland.

I started the interview by asking Paul for his take on Irish cuisine.

People like to talk about Irish cuisine, British cuisine… in a way, historically, there hasn’t been an Irish cuisine as such – just basic grub – and there’s nothing wrong with that if the product is really good.

Modern Irish food is getting pulled, tugged, influenced and inspired from all over the world – it’s in a transition period – a lot of the best chefs still cook with French influence, and it’s lovely food. There are lots of skillful cooks in Ireland and lots of great products, but an Irish cuisine, I think not, though some people love to claim that. In tourist areas, you can do your champ and your smoked salmon and brown bread – tourists love it and it’s great food. In more urban areas, when the locals go out, they want a taste of Italy or Spain or Thailand, things that they had on their holidays.

Are there restaurants out there that are getting better at telling the Irish food story?

I’m surprised that Dublin doesn’t have an amazing Irish food restaurant. Not peasant food but a completely Irish-inspired restaurant. Some places are doing aspects of that but not something world class. A place like St. John in London or Three Chimneys on Skye – where the food is really basic and the quality really great. I’d love to see the equivalent in Dublin, using Irish ingredients. I talked about doing it myself years ago but I had too much on my plate.

On being out of the restaurant game.

I’m out of it now for sure. Belfast does have a great restaurant scene but how Belfast restaurants are making money, I don’t know. Everyone is fighting for the same business, and it’s really only weekend trade. You’ll see a lot of the 3-courses-for-£25 type thing – there’s now a lot more choice for dinner in the middle market, pricewise – but operating that kind of place doesn’t excite me. What’s working best are the small owner-operated restaurants, where there have been no big expansions, which have remained solid – real, quality smaller places, with the owner on the premises and in the kitchen [he mentions Ox in Belfast and l’Ecrivain in Dublin].

As for me, I’m tired now and it’s really nice to be having a break. It’s important for chefs, don’t try to run too fast all of the time, you get burned out. 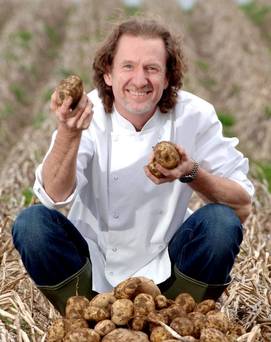 On to the important stuff, the matter of spuds.

I’m pretty fussy about spuds and love to cook them myself. Chips, I think, are probably *the* greatest spud dish. The hardest thing in the restaurant was to monitor the quality of the chips – it always seemed to come down to me – the time of year and variety of potato used were crucial. Potato farls are another favourite [and he stresses that he’s not saying that just because he happens to sell his own brand of potato farl]. They elevate the Irish breakfast to a world class meal and I’m talking here about the Ulster breakfast, it’s the best breakfast in the world. 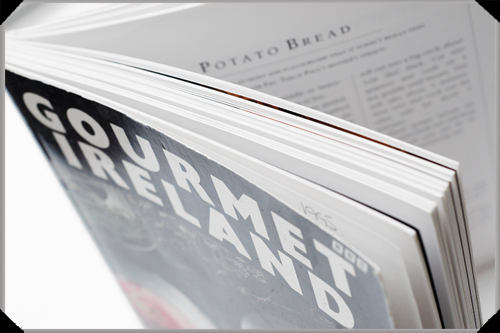 While many of the recipes in Paul’s 1994 Gourmet Ireland book are not necessarily traditional,
the Ulster Fry does feature, as does his Mammy’s recipe for potato bread (or potato farls, depending on your terminological preference)

As we become more supermarket oriented, lots of people don’t know varieties of spuds anymore, which is a bit of a problem for the potato lover. It’s such a simple thing but such a huge thing at the same time, knowing how varieties differ and how they can be different at different times of year. I tasted some spuds from Comber in October and they were so good – velvety and with a great flavour – that I took them ’round to friends and made everyone taste them.

Northern Ireland Maris Pipers can be very good, as can Navans. And often, the worst looking spuds can have the best flavour. Be really suspicious of a good looking spud and never buy a generic bag of white potatoes with no variety on it.

My current favourite is a really lazy one:

Wash your spuds, leave the skins on, cut them up (not too small), cook them [boil/steam] (with salt, of course), and finish with the granny tea towel method [he pauses] – that method is obligatory for all people serious about cooking spuds [I know exactly what he means and, believe me, he is serious]. Crush the cooked potatoes with a fork, add some red onion and extra virgin olive oil, a decent one; I might also add some mayonnaise and have that with a bit of fish and black pudding – I’m obsessed by that combination at the moment. I guess you could say it’s inspired by Ireland if not completely Irish.

And what about Christmas dinner, then?

It’s never absolutely traditional if I’m doing the cooking for Christmas, but close to it – there’s something comforting about it being a family dinner.

We will have 2 types of spud – roasties and usually a mash or maybe a gratin; I like red cabbage with turkey (and not cranberry sauce). My big thing is that I always take the legs off the turkey, bone them, stuff with sausage meat, herbs and onion, roll up and roast. These have become the star attraction at the Rankin Christmas dinner; we have Mum’s classic Irish broth beforehand [he mentions stock, chicken and barley] and there will be snacky stuff: smoked salmon canapés on potato farls with some crème fraîche – a kind of Irish blini; you have to try not to eat too many of those before dinner. 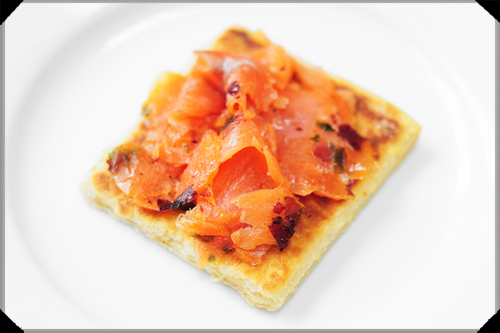 Whatever about the turkey, this inquiring mind wants to know how you do your roasties.

As some of the family are veggie, I tends to use a vegetable oil for the roasties, perhaps with some butter; in general, I’m not too fussed about which fat is used – it’s all good if you get the right spud [I nod my head violently in agreement] and it’s in the cooking too – you need a good layer of fat to get them roasted properly. If I do have a preference for roasting fat, it’s dripping. Goose fat does work really well with the Christmas turkey but I’d go half and half goose fat and veg. oil to get a less pronounced goose fat taste.

What my Mum used to do, though, was deep fry the roasties: par boil the potatoes, then cool and ruffle them up a bit and deep fry in oil; even better with some dripping added; it’s a good method if you’re stuck for oven space at Christmas.