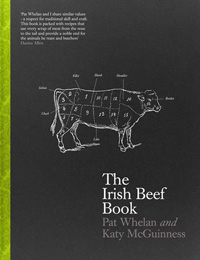 If there was one encouraging thing about the discovery that the meat in certain supermarket beefburgers was, to a greater or lesser extent, equine in origin, it was that, anecdotally, at least, it sent people back in the direction of their local butchers. The aforementioned Irish Beef Book, by Tipperary-based master butcher Pat Whelan and Katy McGuinness, does everything to encourage that trend. It is a celebration of Irish beef and of the craft of butchery and, among other things, addresses that thorny question of fat head on:

We need to develop a healthy relationship with animal fats

So say the authors, and their recipes will give you ample opportunity to explore that relationship, covering the full gamut of possibilities: the steaks, the roasts, the quickly cooked and the slowly braised, the lesser known cuts as well as the classics, and the accompaniments, amongst which I naturally note beef dripping roasties, horseradish mash and oven chips with rosemary salt. 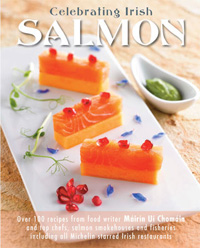 For the meat or beef lover, the Irish Beef Book is a must-have, but it’s just one of a whole slew of Irish-published cookbooks this year, which have – somewhat appropriately – also included a book specialising in salmon. Celebrating Irish Salmon by Máirín Uí Chomáin, who has previously authored books on both Irish oysters and Irish mussels, presents a collection of both her own salmon recipes and those contributed by an assortment of Irish chefs and food producers. Quite apart from her long experience as a teacher of home economics, Máirín’s knowledge on the subject stems from her father having been the ghillie – a professional fishing guide – on the Costello river in Galway for about 30 years:

The book also includes contributions from Prof. Ken Whelan, an authority on salmon and trout and, without getting mired in what is another one of those thorny issues, does include some words on conservation of wild salmon. Mainly, though, the book is about cooking, and covers basic preparation methods and very approachable recipes from Máirín, from salmon burgers to smoked salmon gazpacho, and there are some fillets crusted with hazelnuts and highbank orchard syrup that I have my eye on. The recipes from other contributors can (unsurprisingly) be a bit cheffy – it includes this one from Restaurant Patrick Guilbaud’s which I have previously attempted – though others like ginger guacamole with wild smoked salmon from master fish smoker Sally Barnes are about simplicity and appeal in equal measure. And – whether accompanied by boxty or mash, or any number of other potato preparations – I am glad to note that the salmon in this book is never short of a spud. 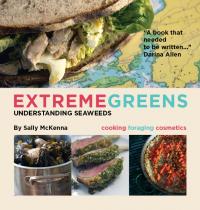 Another book with a specialist focus, and one which I have mentioned in these parts before, is Sally McKenna’s book on seaweed, Extreme Greens. If you are among those who think of seaweed as no more than a slippery, slimy citizen of the seashore or who have less than pleasant childhood memories of milky carrageen jellies, this book will exhort you to think again. It makes an important and ancient food very accessible, such that you might, in no time, find yourself sprinkling nori flakes on your popcorn or having dilisk crisps with your next ham sandwich. It certainly helped to inspire my recent recipe for kale and dilisk mash.

The benefits of seaweed are legion and Sally will happily reel off a slew of “more thans”:

Seaweed has twice the amount of vitamin C as orange juice, 10 times more calcium than cows’ milk, 50 times more iron than spinach; it has vitamin B12, which you can’t get from plants otherwise; up to 80% of the dry matter of seaweed is sea minerals and it has every single mineral and trace element that the human body needs.

And that’s not even the half of it. The book aims to familiarise you with both overt and covert ways of incorporating seaweed into your diet – as well as into your skin and beauty regime, with formulae for home cosmetics included – and we would all be the better for doing so.

And so to the raft of other Irish cookbooks published this year. Many of our homegrown telly chefs – Neven Maguire, Catherine Fulvio, Kevin Dundon, Rachel Allen, Donal Skehan – have new books out this year which, though they each have their own slant, are all on a general family food theme. The choice here? Really, it’s down to whether you like the personality and style that each brings, from Neven’s reassuring presence to cheeky chappy Donal, who has even brought his Homecooked show on the road around the country. For what it’s worth, I will say that Kevin Dundon’s book does a good line in spud recipes. 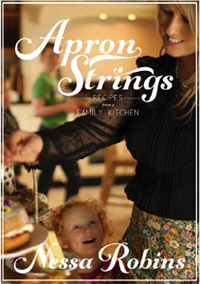 Several books have come this year from the food blogger ranks and Apron Strings by Nessa Robins, based on her Nessa’s Family Kitchen blog, is very much a book of family and home. It reflects what Nessa cooks for her family – at home or for picnics or kids parties – along with memories of relatives and friends and food shared. As a trained nurse, she also has an eye to natural remedies for common ailments and the importance of nutrition during pregnancy and when caring for an older person or invalid. It’s a very warm book, much like Nessa herself. 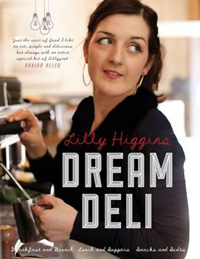 I love the premise of Dream Deli, the second book by Lilly Higgins, with a collection of recipes – including many that are veggie-friendly – that she would serve in her own little café, if she had one. Though recipes are sectioned into breakfast & brunch, lunch & supper, tea break & desserts, and sides & extras, to me it feels, above all, like a big book of brunch, what with the granolas and the waffles and the whole clatter of egg dishes; suffice to say that if Lilly should ever open a café, I would, soon thereafter, be there. 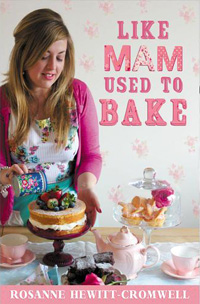 There’s a feeling of home and comfort about Like Mam Used to Bake from Rosanne Hewitt-Cromwell’s blog of the same name, mainly because it has things like rock buns and gingerbread loaf and the kind of old-fashioned cakes and desserts that I grew up with (and, in Rosanne’s case, as were inspired by her late mother). I also greatly appreciate the fact that Rosanne has a section titled buns and not cupcakes, and that there are fairy cakes with a delicate amount of icing as opposed to a tower of buttercream. A bit like my Mam used to bake too, and sometimes still does. 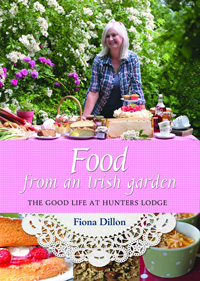 Fiona Dillon’s Food from an Irish Garden, which grew out of her Hunter’s Lodge Living blog, is about swapping urban lifestyle for country idyll (the subtitle ‘The Good Life at Hunter’s Lodge’ is more than a passing reference to the ’70s BBC sitcom, ‘The Good Life’, about a couple’s adventures in adopting a self-sufficient lifestyle). It is, she says, the book that she would have wanted when she took to the country life – with poultry and garden basics, recipes for cooking and preserving that home grown bounty and ideas for homemade gifts – and it is a gentle but practical primer for anyone contemplating such a move (and who may as well watch a few episodes of The Good Life while they’re at it).

Master It, the first book from Rory O’Connell, co-founder with his sister Darina Allen of the Ballymaloe Cookery School, is a solidly written guide that is not just about recipes but about technique – it has the feel of a soon-to-be-well-thumbed kitchen manual. Darina, meanwhile, has added 30 Years at Ballymaloe to her catalogue, with recipes and remembrances from 30 years of Ireland’s best-known cookery school. As former Ballymaloe student Caroline Hennessy describes it: “It is a celebration of the place, the people and the ethos that underpins the whole enterprise. It’s also a reminder of just how she and Ballymaloe transformed food in Ireland.”

Another former Ballymaloe student, Lynda Booth of the Dublin Cookery School has also produced a substantial first book, From Lynda’s Table. Definitely not in the bish-bash-bosh category this, it lays down solid cooking foundations before delving into collections of recipes influenced by both the Far East and the near West (of Ireland, that is).

The Chapter One book by Ross Lewis, meanwhile, is a real coffee table affair, beautifully produced and photographed, with recipes from Dublin’s long established Michelin-starred restaurant of the same name, and profiles which celebrate the restaurant’s staff and its suppliers. The recipes are to be admired, mostly, and perhaps undertaken for a special occasion. Alternatively, they may simply inspire you to book a table at Chapter One, which is never a bad idea.

And last, but not least in my impossibility of cookbooks, is Eat West, a slim volume put together by Elaine McGrath and Maeve Hetherington in a voluntary initiative in aid of the ISPCC. It’s a collection of signature recipes and tips from a selection of food producers and restaurants around Galway, Mayo and Clare, and a reminder of what a fine collection of said people they have in those parts. Contributors include J.P. MacMahon of Cava Bodega and elsewhere, Friendly Farmer Ronan Byrne, Aoibheann MacNamara of Ard Bia, Ultan Cooke of Aniar, Graham Roberts of Connemara Smokehouse and Sheridan’s Cheesemongers.