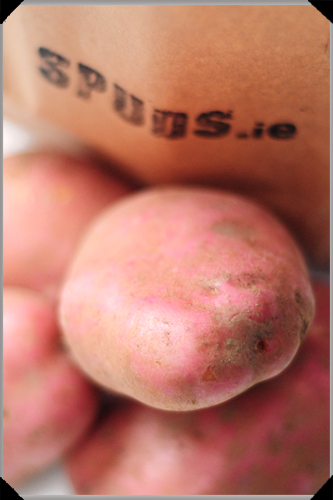 Almost all commercial potato crops in Ireland – or most anywhere else, for that matter – are subjected to a high level of chemical spraying. In the past few years, with the emergence of increasingly virulent blight strains – and I’m looking at you, Blue 13 – the frequency of spraying has increased dramatically, from around every 7 days to every 3-4 days; spraying occurs routinely, whether there’s blight about or not, and the number of sprays applied over the growing season has jumped from around 12 to 20 or so. It’s costly for the farmer and it doesn’t do the environment any favours either.

A potato like Sárpo Axona, on the other hand, can be grown without sprays: it has shown good resistance even to the Blue 13 strain, which has clobbered many other varieties previously deemed blight resistant and, though not completely immune to blight – that, in spud terms, is the wholly unattainable grail – spots on the foliage develop only slowly and don’t travel down into the tubers. David Shaw describes its many advantages thus:

When you grow Sárpos commercially, you save an awful lot of money because you’re not putting on blight sprays, you’re not putting on aphid sprays, you’re not putting on herbicide treatments; fertilisers and irrigation are not quite so necessary as the roots extend way down into the soil, where they can better find their own nutrition and water; their foliage is so vigourous that it suppresses weeds; their long natural dormancy means that they store without sprouting until late spring and don’t require cooling and refrigeration. When we do the tot up of greenhouse gas emissions, its about half of that expended [compared to other commercial potato crops].

Importantly, of the various potatoes in the Sárpo family, it is Sárpo Axona which, to my mind, is the one that the Irish consumer and Irish palate would find most generally acceptable. To the casual observer, Axonas look similar to the Rooster potato – which has become Ireland’s de facto spud in recent years – except with paler reddish skin and flesh that is lighter in colour and a little drier in texture. It has an appreciable potato flavour and is good for mashing and baking. And, as I discovered last Saturday, it also makes a pretty decent crisp. 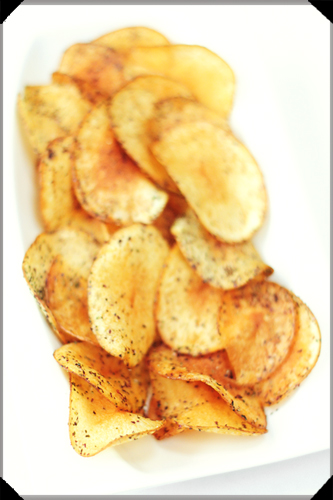 Since the early part of 2012, Spuds.ie – a voluntary, community-based project, spearheaded by Kaethe Burt-O’Dea – has been encouraging growing of, and research into, the Sárpo varieties. Last year – in what was an appalling year for blight – up to 300 participants here in Ireland trialled three of the Sárpo varieties – Sárpo Axona, Sárpo Mira and Blue Danube – and reported very positively on their findings, from both a cultivation and taste point of view. 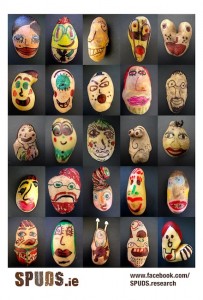 This year, Kaethe – with the help of a donation towards seed costs and in conjunction with Wicklow farmer John Swaby Miller – has grown several tonnes of Sárpo Axona which she is keen for people to try out. I sampled them in crisp form, as kindly cooked for me by Kaethe at her kitchen stove this weekend, and I have used some of my own home-grown Axonas to make this mash, among others – but Kaethe would like more than just my opinion.

Restaurants – particularly in the Dublin and Wicklow areas – who would be interested trying some Sárpo Axona potatoes and reporting on their experience with same, are encouraged to get in touch with Kaethe Burt-O’Dea (at research@spuds.ie). There are also plans afoot – with the help of volunteer support – to have at least some Axonas available for sale at a number of Dublin markets coming up to Christmas and, with the right manufacturing partner, another run of Kaethe’s Crisps with a Conscience may be on the cards. Watch this space.