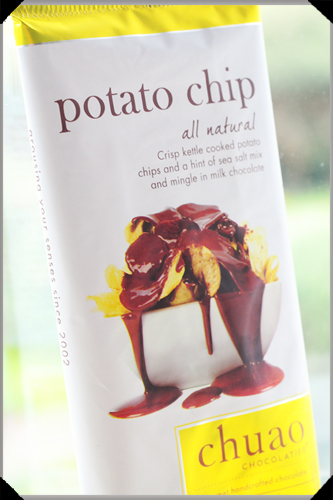 I gathered that I had been given something a bit swanky, what with the fancy packaging and the fact that this potato chip chocolate (and given that it’s Californian-made – by Chuao Chocolatier – I must accede to the American terminology) swapped traditional squares for a pattern which I took to represent cacao pods (or rather, it did, it’s all gone now). And while I can take or leave the terms “gourmet handcrafted” and “all natural” – words which, as Suzanne Campbell reminded attendees at yesterday’s Foodcamp, are b.s. as far as food labels go – the small writing which read “Excellence Award, International Chocolate Salon” was an indication that crisps and chocolate had indeed been elevated by more than a few notches.

The makers, it transpires, specialise in chocolate with unusual flavours – think maple bacon, smoky chipotle or pop corn pop – and the company, founded in 2002 by Venezuelan brothers Michael and Richard Antonorsi, is named after Chuao in central Venezuela, a region renowned for its top quality cacao (and though it’s a digression, it’s worth reading Pete Wells’ 2006 article on Italian chocolatiers, Amadei, and the lure of cacao from Chuao). 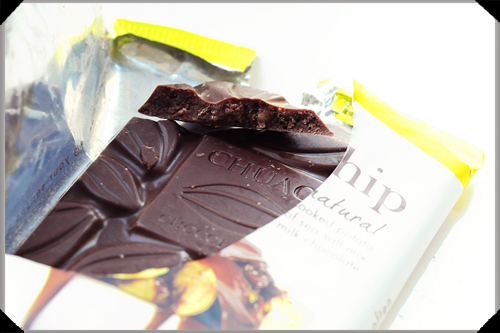 Inside the potato chip chocolate bar

Whatever about the names and labels, what was inside the potato chip chocolate packaging (and try saying that at speed) proved, somewhat unsurprisingly, far more palatable than Mr. Tayto’s efforts: it featured better quality chocolate for a start, and much smaller crisp (chip) particles that delivered little hits of crunch and salt throughout, with a good balance of sweet and salty, and – thanks be to the confectionery gods – nary a hint of cheese and onion (which has its place, and its place is not in a chocolate bar). I later discovered that this selfsame bar was included by U.S. Food & Wine magazine in its pick of the best chocolate in the US. Now, I’d probably have to eat considerably more chocolate than I’d like in order to determine whether I’d go that far in rating this bar, but it passed the wanting-to-eat-more test, which is more than I can say for Tayto’s effort.