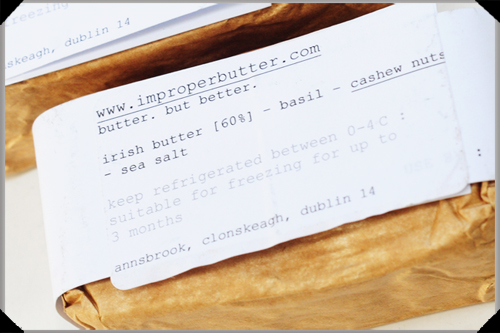 New butter on the block

The ladies at Improper Butter – Elaine Lavery and Hannah O’Reilly – are on to something. Simple idea (small packs of brightly flavoured compound butters which can snazz up anything from a sandwich to a steak), clever name (for those familiar with the Irish language – ‘im’ means butter) and snappy tagline (‘Butter. But better.’)

They’ve been selling said butters – and in the process, testing both flavour combinations and appetite for the product – at the Honest to Goodness Saturday market in Glasnevin for the past few months. The market, it seems, liked what it tasted, and they have now launched into a number of other outlets (L. Mulligan Grocer in Stoneybatter – which lives up to the grocer part of its name on Saturday afternoons – as well as Dunnes Butchers in Donnybrook and The Village Butcher in Ranelagh) and they are working on the branding for their official retail launch, which will feature four butters – garlic, parsley and lemon butter; garlic, chilli and basil butter; Irish sea salt, chive and black pepper butter; and Irish blue cheese butter with Cashel Blue – to be supplemented with 1-2 other flavours seasonally.

The thing is this: you can, of course, make your own compound butters. It’s dead easy: mix your herbs, spices and/or other flavourings into softened butter, shape and wrap in cling film, refrigerate or freeze, and slice off as needed. That’s if you’re organised (or can be bothered). If not, you buy (and many of us do, because we can). Either way, and where your basic spud is concerned, a bit of flavoured butter is a way of adding punch quickly, and with minimal effort.* Boiled, steamed, mashed or baked, but better.