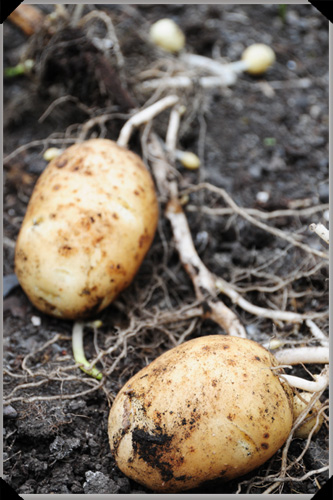 If spuds could speak, what would they say?

Would they surprise (most of) us and paraphrase Muhammad Ali thus: “It’s hard to be humble, when you’re as great as we are.” Swap the boxing ring for the vegetable box and potatoes – like Ali – might just be greatest thing you could hope to find there. Really. A heavyweight amongst food crops, the potato is the world’s most widely grown vegetable; it has been a feeder of nations – not least our own – and is a champion performer in the kitchen, where (if you’re anything like me) you may find it hard but to admire its great range of culinary moves.

And yet humble is the word we most often reach for when we feel the need to attach an adjective to the potato. It’s not that it’s entirely inaccurate as descriptions go – potatoes, with their unshowy, clay-covered appearance, have, throughout their history, often been viewed as a lowly food of the poor – but the fact is that there are a great many other ways in which to characterise our national tuber.

A wish for Natl Potato Day? To ban the use of 'humble' in reference to such a mighty veg. Humbling, perhaps, but not humble. #madaboutspuds

I’ll grant that banning the use of the word ‘humble’ in reference to potatoes might be somewhat extreme (not to mention impossible), but descriptors like mighty, noble, beautiful even – these we might well add to the humble mix, as indeed the new Boxty House logo suggests.

And nowhere will you find greater eloquence in describing matters of the potato than in the work of the poet Seamus Heaney, who passed away earlier this week. He had an immense talent for elevating the ordinary with his words, and poems such as ‘At a Potato Digging‘ are ones by which both we – and spuds – are truly humbled.