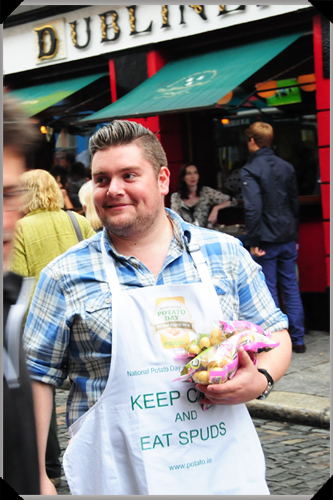 It had brought the potato-givers onto the streets in a battle for young hearts and minds, like the gaggle of young wans who clattered past, not much inclined to take the proffered potatoes. “Ah, sure I’ll take it for me Ma,” said one finally. In contrast, a well-spoken elderly gentleman later stopped to contemplate the display of bulging potato sacks. His interest was not in small handfuls of neatly packaged baby potatoes but in rather larger quantities. He pointed to a sizeable sack. “I’d get that each week,” said he, declaring himself a five-or-six-floury-spuds-a-day man. Old school Irish, in other words. But this day was not about him but, rather, about how we, as a nation, have diverged from his style of potato eating. 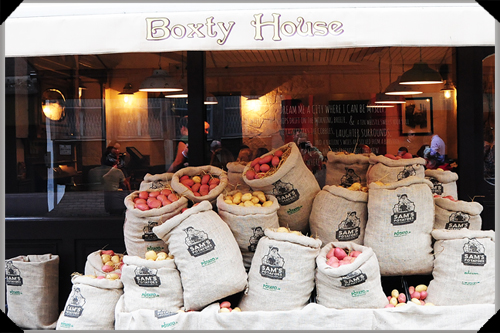 Sacks of potatoes on display outside the Boxty House for National Potato Day,
though most aren’t given to eating potatoes by the sackful anymore

Though still number one as far as our national carbohydrate intake goes, potatoes are eaten less and in more processed forms by younger generations and National Potato Day was aimed at putting potatoes back on their menu, giving it a less traditional and more modern air. And so it was last Friday that, in addition to their appearance on the streets, the nation’s potatoes were seasoned generously with media attention.

For my part, my potato pushing tendencies landed me on newsstands around the country, by way of an interview that appeared in a potato-themed supplement published with Friday’s Irish Independent, and onto the airwaves with two radio interviews marking the day that was in it, first with Declan Meehan on his East Coast FM Morning Show (listen back here) and later with Gerry Kelly on LM FM’s Late Lunch (listen back here). In the social media whirl, #MadAboutSpuds trended. 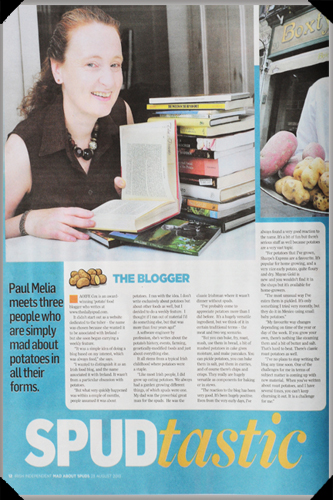 Of course, only time will tell whether this profusion of spud talk will have the desired effect, not only of getting more and different spuds back on to our plates, but of keeping Irish potato farmers in the Irish potato business (which is what National Potato Day was really all about). Biased though I am, I think that it might do just that. Forward, the Spud Brigade!