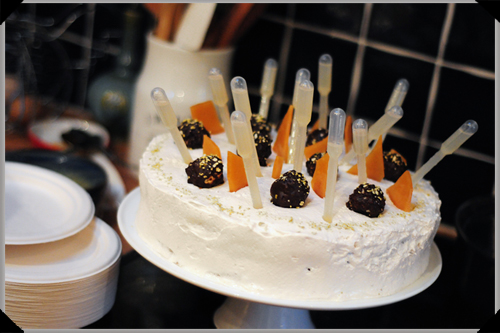 Tequila Mockingbird Cake:
a coconut tres leches (3 milks) cake with chilli caramel shards, pipettes of tequila, lime and cardamom bitters, plus toasted coconut crunchies coated in dark chocolate with dehydrated lime zest dust.
Made by Kate Packwood of Wild Flour Bakery and every bit as stunning as it sounds.

You’d have to admire a food culture that can inspire something like the Tequila Mockingbird Cake (and if you’re wondering just which culture that might be, the tequila is a rather large clue).

This very Mexican dessert – as interpreted by the exceptionally talented Kate Packwood of Wild Flour Bakery – featured at an equally Mexican party hosted by Lily Ramirez-Foran to mark the re-launch, this week, of her Mexican Cook blog. There was molé, there were margaritas and, given the current heat wave, there was even a bit of Mexican weather too. More to the point, though, there were pickled potatoes. 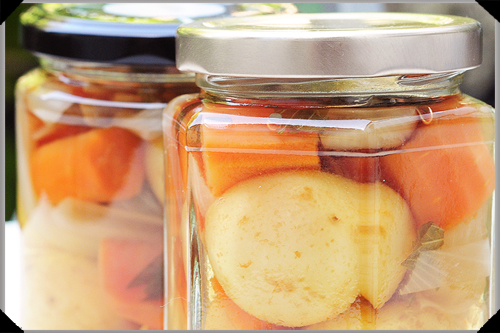 Pickled Potatoes. Made by me.

Now, potatoes aren’t exactly a common choice for pickling, for reasons which, I guess, may be both historical and practical: given sufficiently cool conditions, raw potatoes can be stored for a considerable length of time without having to apply special preservation techniques – so in many cases, the need to pickle, salt or otherwise preserve may not have arisen – and potatoes, particularly those high in dry matter, once cooked, will tend to disintegrate and would simply go to mush in a pickling solution. The one notable traditional technique for long-term preservation of potatoes is that of freeze-drying raw tubers to make chuño, as practised in the high Andes, with nary a drop of vinegar involved.

My researches on the pickling matter had lead me to conclude that Mexico was, in fact, one of the few places where pickled potatoes were “a thing” and, in discussing same with Lily last month at her Mexican food stall in the Honest To Goodness market, I discovered that her soon-to-be-visiting Mexican mama was, in fact, a maker of such pickles. Not long afterward, I watched as Lily sat down with her mother, querying the ways of her pickled potatoes, translating and scribbling instructions for me as the details were recalled, not in an orderly series of steps, but in a series of asides and by-the-ways, by one for whom the practice of pickling potatoes was entirely second nature. I, for my part, went forth and pickled, and while the results don’t have the dazzle of a tequila-crowned cake, they do carry their own little bit of Mexican spirit.

This is my interpretation of the instructions from Lily’s mother, though her directions were much looser than what you see below (and constitute only one of a number of ways in which she pickles potatoes). I’ve included the proportions I used but, really, the relative amounts (and varieties) of vegetables to include are up to you – basically use whatever vegetables you like and prepare enough vinegar to just cover them.

It’s a basic, straight-up vinegar pickle and, depending on how long you leave it, the vegetables can become quite sharply pickled (think classic pickled onions). As such, a small amount can provide a piquant accent to a strong cheddar or a good piece of ham or you could, say, dice a few pickled potatoes and use them to spruce up a potato, egg or other salad. 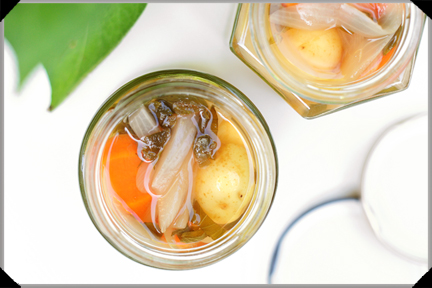 The style of preparation is to partially cook the vegetables first, cool and then cover with garlic-infused cider vinegar – and certainly for the potatoes, you do need to cook them – but I imagine that other vegetables could be simply salted to remove excess liquid, and then pickled. In either case, do use a good quality cider vinegar that you like.

What is important is that the potatoes are not fall apart floury types (and baby potatoes, which is what the recipe calls for, will, almost by definition, be firmer of texture anyway). Use the babiest potatoes you can get and leave them whole and unpeeled. I did cut some of my potatoes in half to get evenly-sized pieces for cooking, but preferred the results using whole potatoes, which did not become as strongly pickled. If your potatoes are quite variable in size, then I would suggest, for initial cooking, that instead of halving bigger potatoes, that you add them to the cooking water in stages, giving larger potatoes a couple of minutes more.