Now, like any good convert, I have, of course, discovered that the world is full of pinners, like Hannah of Kitchen Alchemy – a self-described visually greedy magpie – and one of many participating in Pinterest’s UK launch (as am I, except that I’m not, technically, in the UK, but, eh, I won’t tell them if you don’t). Neither will I tell you to become a pinner yourself, though it might, as when offered the cookies below, be useless to resist.

On a great many occasions over the lifetime of this blog, my attention has been drawn to cookie recipes having, as an ingredient, potato crisps (or potato chips, for the U.S-inclined). It was last week’s encounter with Tayto cheese & onion chocolate, however, that finally moved me to give the combination a whirl. If nothing else, I hope that the results below prove that putting crisps and chocolate together is not all bad – far from it, in fact. 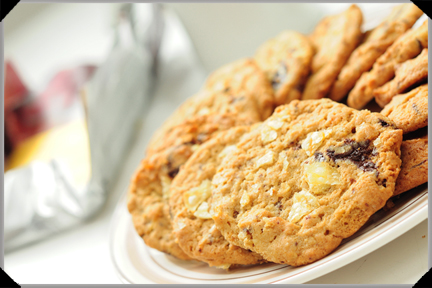 The ingredients used pay homage to that trifecta of childhood treats: the packet of crisps, the bag of peanuts and the bar of Dairy Milk; with crushed, salted crisps, crunchy peanut butter and little chunks of chocolate, this is the cookie that binds them all. (I will also state, for the record, that, try as I might to hold on to the Irish term ‘biscuits’ for describing such a treat, I will grant that anything containing chocolate chips demands to be called a cookie, no matter what side of the Atlantic you’re on).

The effect of the crisps is, of course, to add a bit of crunch and saltiness – no cheese & onion flavour here, thanks very much – and, with the amount I’ve added, it’s relatively subtle in effect (no doubt, in time, I will play around with amounts). As for the peanut butter, I used a brand with no added sugar – if yours has sugar added, you may like to reduce the amount of sugar in the recipe. For the chocolate, use dark or milk chocolate according to your preference – just make sure to use a chocolate that you like.