“Before long it becomes hard to imagine doing much of anything for ourselves — anything, that is, except the work we do ‘to make a living.’ For everything else, we feel like we’ve lost the skills, or that there’s someone who can do it better.”

Though Micheal Pollan might, I think, have missed the news about this weekend’s Grandmothers’ Day events at Sandbrook House in Ballon, Co. Carlow, I suspect, reading the extract from his forthcoming book, that he would have approved.

The extract paints a dizzying picture of an economic world, spinning ever faster on an axis of relentless specialisation, a process which, at the same time, binds us in a tourniquet of learned helplessness and leaves us hopelessly disconnected from the origins of our food. He articulates the case for loosening those bonds, “making visible again many of the lines of connection” with our greater food system through the medium of cooking (or equally, one might infer, through practising the many other food skills with which our forebears were familiar).

And it is that reclaiming of lost skills and passing on of inherited wisdom that underlie both yesterday’s Slow Roots symposium and today’s Slow Food Ireland family event at Grandmothers’ Day. It seems appropriate, then, to introduce you to winter buttermilk, one old way with food that I have recently discovered, and one which is, to my mind, well worth remembering. 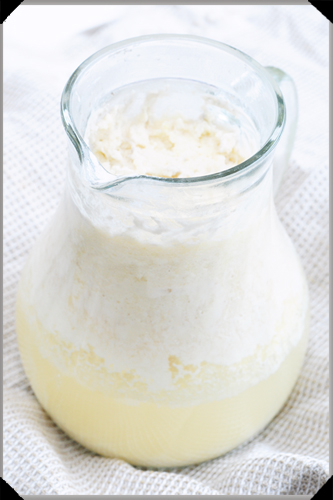 The thing about winter buttermilk is that it is not, in fact, buttermilk at all.

What’s more is that, despite what its name might lead you to believe, winter buttermilk has a dairy content of precisely zero, containing neither butter nor milk nor moo nor cow, but flour and water and – perhaps somewhat inevitably, given my well-documented obsession – spuds. It also (and this is the important thing) makes for a damn fine loaf of soda bread.

I first heard mention of it in an RTE radio documentary on Maura Laverty, the Irish cookery writer, novelist and broadcaster, whose classic book Full & Plenty, published in 1960, graced many’s an Irish kitchen, including my mother’s and now mine. In the documentary, Darina Allen recalls the triumphant descriptions of soda bread – that elemental Irish union of flour, buttermilk and bread soda – from an earlier 1940’s volume, Maura Laverty’s Cookery Book:

…we have given a four-leaved shamrock to the world. One leaf is W. B. Yeats, another is boiled potatoes in their jackets, another Barry Fitzgerald. The fourth is soda bread. And the greatest of these is soda bread. Spongy white soda bread with a floury, brown crossed crust…

Maura Laverty goes on to describe a myriad variations on the soda bread theme, and how people would have made do when buttermilk was not easy to come by, as would have been the case in winter, when cows were not milking. Some people, she said, used the water in which potatoes had been boiled to make their soda bread, but far better was the so-called winter buttermilk which they used in Cork and Meath. Why this may have been peculiar to Cork and Meath is not explained, but what is described is the method of its making and the lovely light loaf that resulted. Having followed Mrs. Laverty’s instructions, and not for the first time, I cannot help but agree.

Whereas winter buttermilk was invented, one presumes, through necessity, it turns out to be a boon for those who like a proper soda bread loaf but who, for one reason or another, are keen to avoid dairy.

The basic idea, according to Maura Laverty’s instructions, which I managed to locate over here, is this: make up a mixture of flour, water, raw and cooked potatoes. Allow this to ferment for a couple of days, after which time you can use the resulting liquid in place of buttermilk in your baking. When you have thus used some of the liquid, you can replenish with an equal amount of fresh water and let the mixture continue to ferment.

Maura Laverty suggests that an amount equivalent to double that specified below should be enough for a fortnight’s supply of buttermilk – this assumes, I expect, that you would be baking regularly during that time. As I wasn’t planning on making very large amounts of soda bread, the amount indicated below was enough for me. I used it to make several soda bread loaves and scones, as well as some (winter) buttermilk pancakes over a 2 week period, replenishing the jug once after the initial use. All were good – very good in fact – and I get the feeling that winter buttermilk is about to become a feature year ’round. 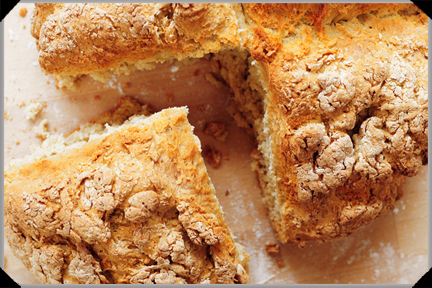 This is the classic white soda bread recipe that Maura Laverty included in Maura Laverty’s Cookery Book and can be made with whatever kind of buttermilk you have. In truth, I had forgotten the loveliness of it, and the making of this loaf was a timely reminder.

With winter buttermilk, you may end up using a slightly larger volume to make this loaf than if you were using regular buttermilk, as the winter buttermilk may contain a certain amount of solid matter. In any case, as with any soda bread, don’t add all of the liquid at once and judge for yourself whether the mixture is too dry and needs a little more added.