When asked in an interview published in the Irish Times last April to describe himself in six words, David said simply “just very happy to be alive.” Sadly, that is no longer the case and the Irish food landscape is all the poorer for it. 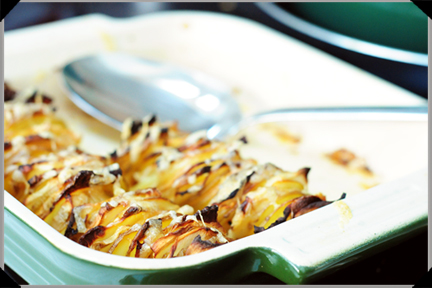 It so happened that, when I heard about David Tiernan’s passing, I had just come from the Honest To Goodness market in Glasnevin, where, among other things, I had bought some of his Glebe Brethan cheese. It seemed only right and proper to put it to good use.

As I had also bought celeriac and am never without potatoes, this is what I made. You could call it a kind of gratin – the vegetables are sliced thinly, brushed with oil and minced garlic, baked and sprinkled with grated cheese. Unlike most gratin-style potato dishes that I’ve made, though, the slices here are not laid flat but, rather, stand on end, so that the edge of each slice has a chance to get crispy, then the cheese is added and gets all melty, and you really want for nothing more.