Today’s post is brought to you, Sesame-Street-style, by the letters L and B.

L, first and foremost, is for the dreaded lurgy, to which I have been subject for the past few days and which has kicked to touch all inclination to cook or do anything much. Pah!

On the other hand, L is for lovely, which is how I would describe a recent request for interview from new blogger on the block, Piggy Fair. While I’ll admit that something in the name tempted me to respond, all Miss-Piggy-like – “Qui, moi?” – you can read what I actually said over here. 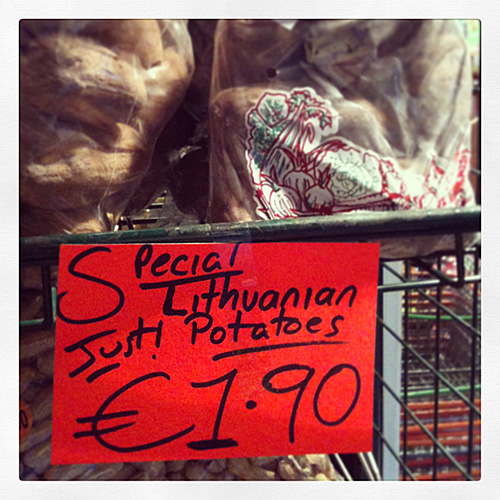 L also stands for Lithuanian, and I was as surprised as anyone to spy Lithuanian potatoes for sale just minutes from my door. I, of course, did what any dedicated potatophile would do, and brought some home, figuring that if the local Lithuanian community were that particular about having access to their own potatoes, then the matter would bear further investigation.

It was a simple enough case, really. Boiling confirmed that they were a waxy-ish sort, leading me to infer that, as with most continental Europeans, Lithuanians do not share the Irish love of a floury spud (which is often all you’ll ever find here). Twitter later suggested that they were “stone mental for the spuds, them Lithuanians” – as this veritable catalogue of Lithuanian potato preparations would also indicate – while a search for “Lithuanian potatoes” on Google gives priority to several variations on the theme of kugelis or potato pudding – a weighty, wintry mass of grated potato, onions, milk, eggs and bacon and, according to some reports at least, a Lithuanian national dish.

Thus enlightened, I planned next to try my hand at said potato pudding, but it was not to be (see Lurgy, above). I will also say that, flavour-wise, these particular potatoes did not, to my mind, live up to their ‘special’ billing, but perhaps the real proof will be in that potato pudding. L, it seems, will have to be for later.

B is for Burns Night Supper and, following the success of the inaugural West Cork Burns Night Supper last year, the West Cork Hotel and West Cork Food will host the event again on the 25th of January. The event will celebrate Scotland and the Scottish poet, Robbie Burns, with a memorable meal featuring West Cork produce, and will also include ceilidh dances, poetry recitals, the piping in of the haggis and, inevitably, ‘a wee dram.’ Bookings are being taken by the West Cork Hotel at €40 per head, see here for more details. 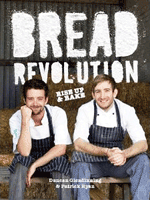 B is for book and B is for Bread Revolution, which has been short-listed for the Gourmand World Cookbook Awards in the bread category. The book, co-authored by Patrick Ryan, of the Firehouse Bread School on Heir Island in West Cork, and Duncan Glendinning, will go up against authors from France, Austria, Denmark and Singapore for the title of Best Bread Book. The winner will be crowned at an awards dinner on February 23rd at Carrousel du Louvre in Paris. Best of luck to Patrick and vive la Bread Revolution.