I have no idea how my sister came to know or suspect that B. could get the poitín for her. I have no idea, for that matter, where B. got the poitín from. The transaction was spoken of in veiled terms: the code name was ‘blue nun’, though the unholy liquid thus procured packed considerably more punch than your average Liebfraumilch. It was evidence, too, that the twin Irish traditions of illicit distillation and of keeping a drop of rare oul’ stuff stashed somewhere about the house, were alive and well.

Ever since taxation on alcohol was introduced by the British Government in the 1660s, remote parts of the country have been home to poitín-makers and their less than legal practice. A clear, unaged whiskey, with a notoriously high alcohol content, poitín is traditionally distilled from grain – usually malted barley – in a small pot still, though it has been made from a great many different things over the years, including (unsurprisingly) potatoes.

My childhood recollection is that there was always a bottle in my Grandma’s house – usually a 7-up or Fanta bottle that contained a clear and decidedly unfizzy liquid. It was a bottle that we knew far better than to open. Over the years, poitín has been the stuff of poetry and song, renowned as a cure-all – a drop or two of poitín in warm milk would, my Ma says, have been given by my Grandma to an ailing child – and equally denounced as sinful and dangerous. In ‘A Drop of the Craythur‘, a documentary first broadcast on RTE Radio in 1976, Pat Feeley describes it as no less than “a fiery curtain of oblivion against centuries of misery, poverty and oppression.” 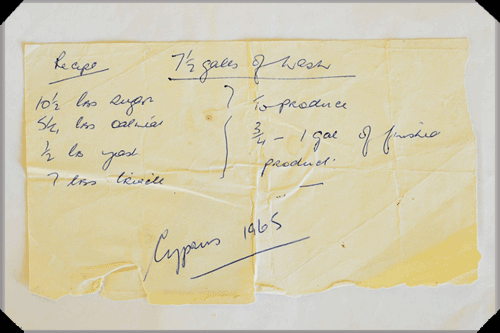 Peacekeeping and poitín: not averse to a bit of distilling himself, scrapbooks kept by my Da of his time spent serving with the U.N. in Cyprus in 1965 include this recipe which uses sugar, oatmeal and treacle to produce 7½ gallons of wash and ¾ to 1 gallon of an otherwise unnamed “finished product.”

The poitín landscape has changed in recent years, however. In a relaxation of the centuries old outright ban, production of poitín for export has been allowed since 1989, while the sale of poitín under license here in the Republic of Ireland has been permitted by the Revenue Commissioners since 1997. In 2008, Irish Poitín was accorded EU Protected Geographical Indication (PGI) status.

Bunratty Potcheen was the first legally produced poitín in Ireland (though, with an ABV of 40% for the locally sold version and 45% for export, it ranks as tame in comparison to poitíns of legend). Knockeen Hills have been producing a range of poitíns over the past fifteen years, ranging in strength from 60% ABV to a whopping 90% ABV. Brandwise, both have an eye to the tourist and export markets and there can be more than a touch of the Oirish about their appearance. The newly established Teeling Whiskey Company, however, has taken a different tack. 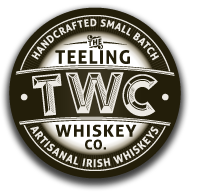 Founded by Jack Teeling, formerly of Cooley Distillery, the Teeling Whiskey Company is all about injecting a bit of interest and character into the Irish whiskey market. Launched just before Christmas, their new spirit on the block is a poitín and if poitín can be described as classy – and for most people, that’s a very big if – then this one certainly looks the part. Blended from 80% grain spirit and 20% malt spirit, David over at Liquid Irish, my partner in tasting at the Teeling Poitín launch, observed that the use of the milder grain spirit “makes it quite palatable neat, and it’s gentler on the nose and tastebuds than the 61.5% ABV would suggest.”

Palatable, then, but still with characteristic poitín potentcy, this is a spirit that – if Jack Teeling has his way – could bring the craythur out of the country shebeen and into the cocktail bar. It’s already happening in the U.S., where Jack points to new releases of clear, unaged whiskeys, like White Dog from Jack Daniels, and various legal versions of moonshine, which are becoming popular with mixologists. If the poitín-based cocktails whipped up by the folks at W.J. Kavanagh’s for the Teeling launch were anything to go by – including the Jack Rose with poitín, apple and grenadine and the Christmas Cosmopolitan, with (among other things) poitín, cranberry, frankincense and myrrh – then he could be on to something. He will still have a lot of work to do, though, to convince a populus to see poitín in a new light, they who have an age-old and very different view of the quare stuff, and one that, in some quarters at least, is still code-named blue nun.