Even before cattle were here, apples were grown

Con Traas of The Apple Farm

Somehow, during the course of the dinner, I managed to make a note of the comment above by Con Traas.

The venue was Avoca’s Salt Café in Monkstown a few weeks back, and dinner, frankly, seems like too restrained a word for what was, in fact, a glorious celebration of people, of place and of produce, masterminded by the dynamic Tipperary Food Producers group, under the stewardship of meat meister, Pat Whelan. Course after course of Tipperary’s best – spiced lamb koftas from Sheepwalk Organic Farm, Crowe Farm pig’s cheek pastilla, Gortnamona goats cheese with Inch House black pudding, sirloin of beef à la Pat Whelan, Apple Farm apple crumble, a raft of Cooleeney cheeses, treats including the impossible-to-resist Holycross chocolate biscuit cake from the Tipperary Kitchen, wines supplied by Red Nose Wine – and chat after chat with the great and the good of Tipperary food, and the charming company, among others, of Cate from The Cookie Jar and Kate from O’Donnells Crisps. Tipperary food had come to Dublin and claimed its place on the menu with considerable aplomb. 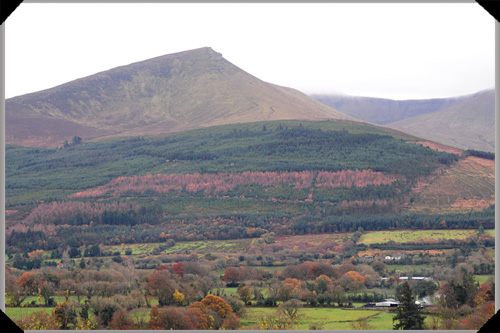 The Galtee Mountains, in the heartland of Tipperary 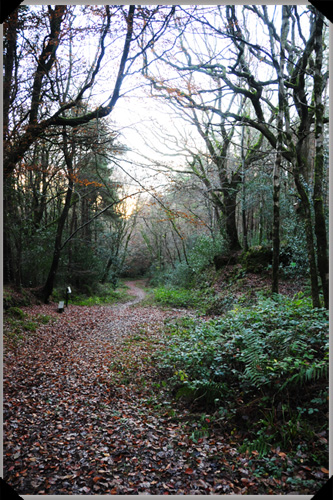 By sheer coincidence – and very lucky happenstance – having been thus kindly treated by the Tipperary Food Producers on my home turf, the following weekend I made the proverbial trip to Tipp at the invitation of the Aherlow House Hotel. The hotel itself – comfortable, rather than swish – is crowned by its location in the Glen of Aherlow, with views across to the Galtee Mountains. The big draw, however, was that the trip would include a visit to The Apple Farm, home to the aforementioned Con Traas. It is an ancient and elemental thing that Con does in farming apples. It is also a difficult job – when 95% of the apples sold in Ireland are imported – to farm apples in Ireland these days and make it work. Con Traas does it, and does it with style. 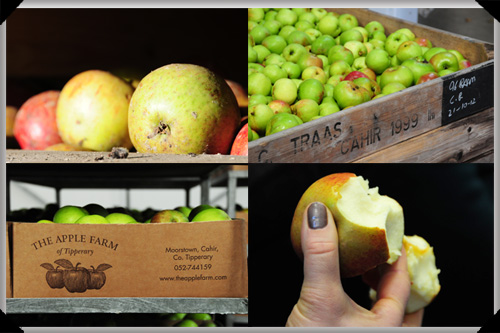 Apples, apples everywhere at The Apple Farm in Tipperary:
the local must like 'em, because around 1.5 million apples are sold each year
via the farm's shop, from where they also sell other fruit, juices, cider vinegar and jam

And so, on a beautiful, crisp Tipperary morning I found myself surrounded by beautiful, crisp Tipperary apples. Con was guiding us around the farm, where he grows around 40 acres of fruit, including up to 60 different varieties of apple, as well as other soft fruits, such as strawberries, raspberries and plums. Growing fruit is part of Con’s DNA. His Traas family forebears have grown fruit since the 1800s, first in The Netherlands and then, since the late 1960s, near the Tipperary town of Cahir, at which time Con’s parents moved here and established what is now The Apple Farm. After he finished his studies in Agricultural Science at UCD, Con, perhaps inevitably, graduated back to the farm. 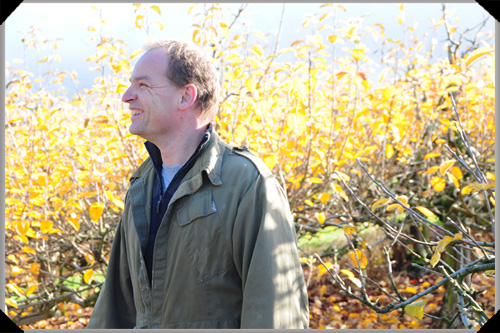 Con Traas: one man and his apple trees

With margins tight, transport costs high and plenty of competition from cheap, imported apples, there was an impetus to add value to their crops and, with the help of some funding from LEADER, the Traas family started making juices in 1995. The juices, pressed and bottled on the farm, are made with great care and – given that most juices made in Ireland use imported fruit or concentrate – they are an example of that rare bird, an Irish apple juice made from Irish apples. Leftover pulp from pressing the fruit goes to feed a neighbour’s cattle and Con says that the cattle absolutely love apple and carrot pulp – it makes their hair shiny and they start chasing tractors, which is an ad for Con’s apples if ever there was one. 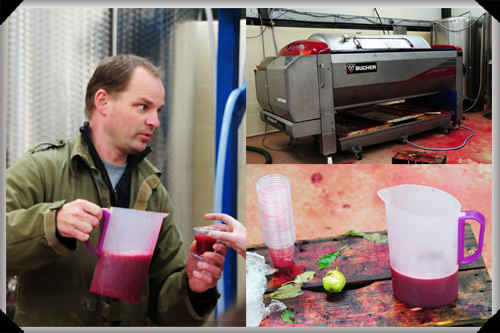 Con Traas with his juicer and some freshly pressed apple and blackcurrant juice:
Fruit is very gently pressed for a couple of hours and the sediment allowed to settle for couple of days.
The juice is then heated to about 45 degrees and bottled, then pasteurised in a hot water bath at 70 degrees for 20 minutes, so that it is stable and has longer shelf life.

By now Con has a finger in many apple pies – selling fruit directly to the public via their farm shop, to local bakers and to retail customers like Marks and Spencer, as well as making juices and cider vinegar – and, though he hasn’t gone into the cider business himself (yet), he and his farm have been described by Tomás Clancy in a Sunday Business Post feature on craft cider as “a gravitational force around which many artisan cider producers orbit.” The Apple Farm was, in addition, the location for the first Irish Apple and Craft Cider Festival held in September of this year. As well as all of that, Con is the chairman of the Irish Apple Growers Association, a lecturer in horticulture, biology and sustainable agriculture at the University of Limerick and, of course, a member of the Tipperary Food Producers group. 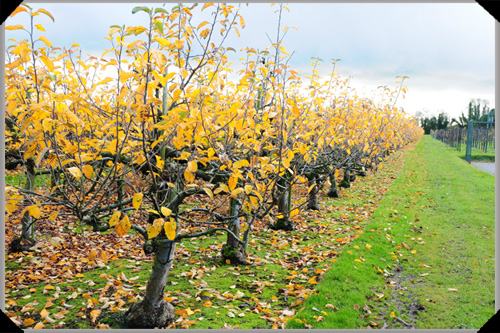 Where there are apples, there must be trees, and The Apple Farm has around 30,000 of them.
All picking is done by hand and pruning takes place right through the winter months.
With too much disease pressure to grow organically, conditions are monitored to see
if spraying is needed and natural methods of pest control used where possible.

You get the impression, as you walk around the farm with Con, and munch apples that range from the grassily delicious Welland to the perfumed and popular Elstar, that what this man doesn’t know about apples is probably not worth knowing. Yet he has an easy, unassuming manner and wears his knowledge lightly, and always with a smile. It came as no surprise to me when, a few days after my visit, I heard that Con had been honoured at the Good Food Ireland awards as the Good Food Ireland “Come And See” producer of the year, an award which recognises producers who encourage visitors to experience and learn about their product in an engaging way. There is no doubt but that if you visit The Apple Farm, you will come away with a renewed appreciation for a very ancient food and it is Con Traas that you will have to thank for that.

If you fancy getting your hands on some Tipperary food in the form of O’Donnells crisps, then pop over here – I have donned my Santa hat and have several boxes of same up for grabs over the next few days.

Among other things, the O’Donnells use cider vinegar from their neighbour, Con Traas, to make their excellent salt and vinegar flavour.