A Mugful Of Mojo

In its original sense, a mojo is a small bag containing one or more magical items, traditionally made for an individual who conceals it on their person at all times in order to have some desired magical effect. For every dedicated blogger, there is almost always some occasionally mysterious and generally non-financial something – a mojo if you will – which fuels their blogging fire.

The potency of one’s blogging mojo can wax and wane of course – at its best, there is a spontaneity and a there-and-then-ness about blog posts – at other times, blog posts (as I heard them described in the National Library this week) become the homework that you didn’t do. It was that thought that reminded me of several posts that, for assorted reasons, were languishing in my undone category, including the one that now follows. And it was that thought, along with the injection of a little coffee-powered mojo, that finally spurred me to finish. 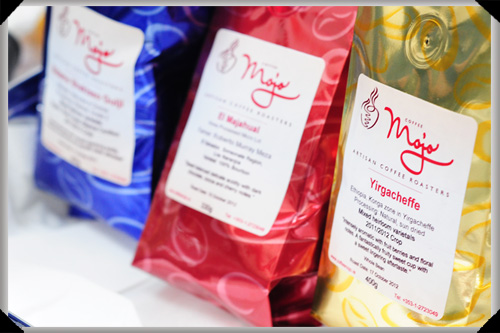 “Too many bad days at the office” is how Kevin McLoughlin of Wicklow-based Coffee Mojo sums up his motivation for going into the coffee roasting business. He believes that there is something magical – and, yes, mojo-like – about good coffee, freshly roasted and correctly brewed. He is also an immensely accommodating chap and arrived at my house one Friday morning, over a month ago now, with three of his freshly roasted coffees, several crate-loads (no, really, crate-loads) of coffee brewing gear and an immense desire to demonstrate what both he and his coffees were all about. 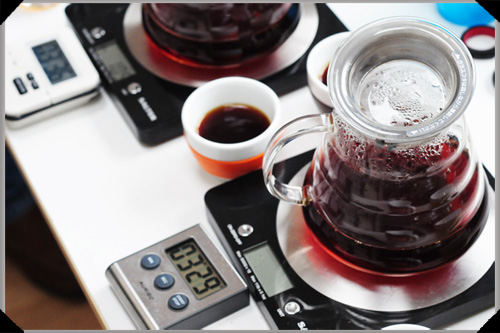 Brewing up a mojo

Displaying the attention to details of grinding, timing and temperature that I’ve come to expect from those in the coffee know, Kevin made three pour-over filter brews, showcasing three of his single origin coffees, while our conversation ranged over brewing methods, countries of origin and our changing coffee culture. Each of the three coffees were examples of different coffee processing methods – which refer to the mechanisms by which coffee beans (or seeds, really) are removed from their surrounding fruit and dried in order to prepare them for subsequent roasting. 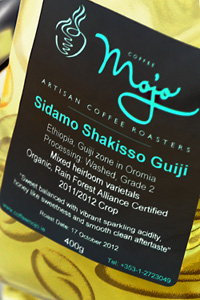 His Sidamo Shakisso Guiji from Ethiopia was the lightest and brightest of the three. It’s a washed coffee, which refers to a processing method which, broadly speaking, results in the removal of the layer of mucilage that surrounds a coffee bean when it has ripened. With a washed coffee in particular, you tend to get more brightness and acidity and this coffee was very refreshing on the palate – a good choice if you’re in the habit of drinking a lot of coffee throughout the day. 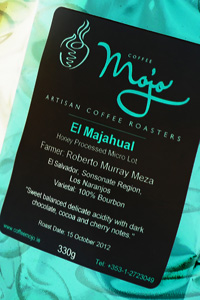 The El Majahual – which proudly displayed the coffee farmer’s name on the bag – is a honey-processed coffee from El Salvador. This process results in some of the mucilage being left on the coffee beans as they’re drying. The mucilage, which is packed with sugars, dries into the beans and gives some sweetness and body to the coffee, as well as allowing the farmer to use less water during processing. This particular coffee, while it retained some brightness, had a crowd-pleasing chocolate character. 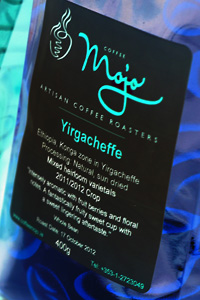 Kevin’s naturally processed, sun-dried Yirgacheffe from Ethiopia inhabits the realm of funky, interesting coffees. The traditional processing method used, where beans are dried while still encased by the coffee fruit, can result in intense sweetness and aromatics in the final coffee. It can also be a difficult process to manage, as care has to be taken to use properly ripe red berries and to see that fermentation does not occur during the drying process. This coffee had bags of fruit – with a rich, almost dried fruit character – and sweetness tempered by a little lemony brightness. The flavour, Kevin says, can throw some people – coffees like this, are, to mix a metaphor, not everyone’s cup of tea. Kevin loves it, though, and I was pretty fond of it too. 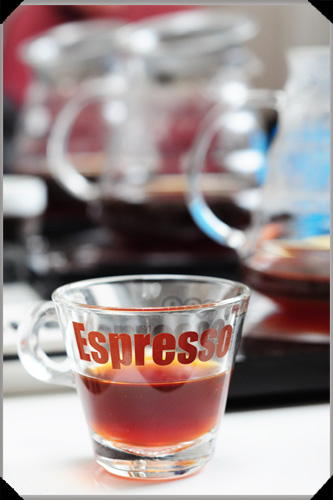 Not espresso in fact, but mojo

You can see Kevin’s full range of coffees and order online on his Coffee Mojo site – in all cases, and to ensure optimum freshness, beans are roasted only after an order has been received. If you’re in the vicinity of Maynooth, you’ll find his single origin coffees being brewed at Boss Hogg Coffee Bar or in Celbridge at Espresso Project.

It seems that the community at Tracton in Minane Bridge, Co. Cork are harnessing their wood-fired baking mojo. Their Christmas Fair, which takes place next Sunday, 25th November from 10.30am to 5.30pm in the Tracton Community and Arts Centre, will – along with much else in the way of arts, craft and festive local foods – include the launch of the first community bread and pizza oven in Ireland. 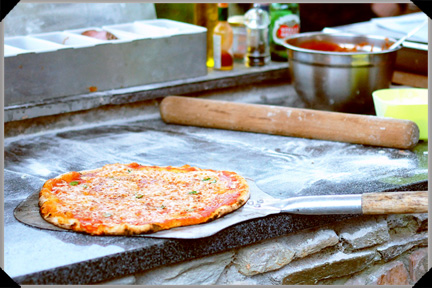 Wood-fired pizza - what wood-fired ovens are all about

The oven is the initiative of local oven builder Hendrik Lepel (who is responsible for building, among others, the wood-fired oven which is put to such very good use at Patrick Ryan’s Firehouse Bread School on Heir Island). The community oven has been built with the help of many volunteers over the last couple of weeks and the very first pizza will be cooked on the day of the Christmas Fair. One hopes it will be the first of many and that the oven will be for life and not just for Christmas. 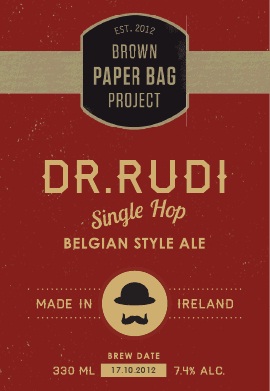 As for the folks who begat L. Mulligan Grocer and W.J. Kavanagh’s, it’s all about brewing mojo these days. With their Brown Paper Bag Project, they are on a mission to brew tasty beers. Except they don’t have a brewery – so they are collaborating with others who do.

Their first release, Dr. Rudi, is a single hop, dark ruby red Belgian style ale, with an ABV of 7.4%, brewed in Mitchelstown. It is being launched this Saturday, November 24th, at 8pm in W.J. Kavanagh’s and will be on draught in both L. Mulligan Grocer and W. J. Kavanagh’s, as well as in 330ml bottles in selected off licenses. They suggest having a contemplative sip of same with your next bowl of moules frites, while anyone attending the launch dressed in bowler hat and moustache (in the style of that famous Belgian sleuth, Hercule Poirot) will receive a snifter of their fine beer.