They like potatoes so much, they eat them on bread.

I think I clapped and made some kind of “woo!” sound when I heard Joanna Schaffalitzky say that. Sometimes I just can’t help myself when it comes to spuds.

Joanna was referring to a Danish fondness for potatoes that sounded like it might just give our legendary Irish love of the spud a good run for its money. She was speaking at Foodcamp – an event now in its third year at the Savour Kilkenny Food Festival, which encourages anyone who so desires to make a presentation on the food topic of their choice. Joanna’s thoroughly enjoyable, thought-provoking and – given the generous quantity of edible samples – very filling presentation looked at how we here in Ireland might do well to look towards Denmark for culinary inspiration, instead of seeking, as we not uncommonly do, to borrow dishes from more Mediterranean climes. 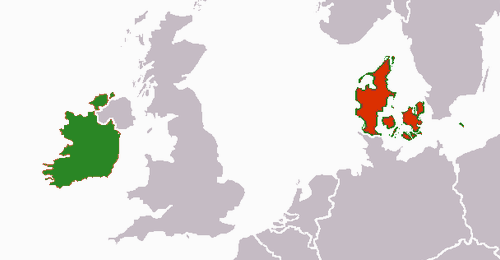 Ireland, meet Denmark: you've got a lot in common (map adapted from wikipedia.org)

In urging us to look at the foodways of our erstwhile invaders, Joanna wasn’t necessarily referring to the lately fashionable “new Nordic cuisine” found at places such as the highly regarded Noma in Copenhagen, but to everyday, traditional Danish home-cooking (something from which Noma does, undoubtedly, take inspiration). With a Danish family background and writing a blog which features both Danish and Irish dishes, it’s a topic Joanna was well qualified to talk about.

She first made the simple, but key, observation that our climate and traditional use of ingredients like dairy, pork and (yes) potatoes, align us far more closely to Denmark than, say, Italy or Spain – not to mention the fact that we both take great pride in our butter and have a distinct preference for drinking beer. There are differences of course: our northerly European neighbours place a heavier emphasis on pickled foods, there is greater use of sour cream and buttermilk, they have more of a yeast tradition in their baking and, with nowhere in the country more than 25 miles from the sea, seafood, and herring especially, feature prominently (we, too, have great seafood, though less of a tradition of eating it). Traditional flavours differ also – where they feature allspice and cardamom, we favour nutmeg and ginger. Bread is very important to us both, but most commonly in Denmark you will find dark, heavy rye breads, where we have our soda breads and somewhat less than remarkable sliced pans. 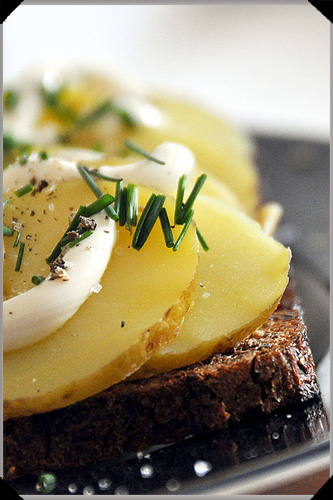 As for potatoes, the Danes do eat them in many ways, one of which is, indeed, as a topping for bread. Kartoffelmad (literally, ‘potato food’), consisting of cold sliced potatoes on dark rye bread, topped with mayonnaise and chives, is one of the many types of smørrebrød (or open sandwich) popular in Denmark, and I think it’s something that we Irish could take to straightaway. It’s not so very far removed from the idea of topping a slice of toasted brown soda bread with a spoon of potato salad (something I’ve certainly done on many occasions) and as veteran consumers of crisp sandwiches and chip butties, putting potatoes on bread should for us, just as it is for the Danes, be nothing new.