I had potatoes coming at me everywhere I turned. In Ireland, “and chips” is a phrase that annotates much more than fish.

For Frank Bruni, former New York Times restaurant critic and now Op-Ed columnist, the ubiquity of spuds in Ireland was a cliché confirmed, and, it seems, a tiresome one at that. He was writing in a recently published NY Times article about his first trip to Ireland, a journey which he often views through the prism of his late mother’s Irish ancestry – her love of the colour green is at last explained by the greens of the Irish landscape, encounters with gregarious and welcoming inn keepers identify Ireland as the source of her chattiness and storytelling, her temperament is echoed by the frequently changing moods of the Irish weather.

His mother’s Irishness, however, clearly did not extend to food (and the article does tell us that, his mother having married an Italian and been “swept into his Italian clan,” food in the Bruni household had a definite Italian accent). Given that Italians tend to go rather lighter on the spuds than we do, it may explain why Mr. Bruni felt somewhat besieged by potatoes during his visit to these shores.

While Ireland is Italy’s peer in natural beauty, it isn’t on the culinary front. As a visitor you just have to make peace with that.

To be fair to Mr. Bruni, the almost universal “and chips” suffix does say much about the fact that, while there is some very fine food to be had in this country – 700 pages worth in John and Sally McKenna’s latest Irish Food Guide – there is plenty that you would not want to write home about (Mr. Bruni says that he ate well here “by eating carefully”). He takes particular umbrage with the serving of several types of potato on one plate. Referring to a dish he had in The Winding Stair (a place he otherwise much enjoyed):

There my stuffed cabbage was filled with mashed potatoes and placed beside what tasted like a thin potato purée, which abutted wedges of roasted potato. The kind word for this would be redundancy. The accurate one would be overkill.

One man’s overkill, however, is another’s tradition. The serving of two (or more) types of potato on the same plate is part and parcel of the Irish food landscape. The many shades of potato, to me, speak reassuringly of home, of Sunday dinners, and of my Irish mammy. Done well, I believe it has a place in modern Irish cooking. It is as intrinsically Irish as the forty clichéed shades of green. You, Mr. Bruni, will just have to make peace with that. 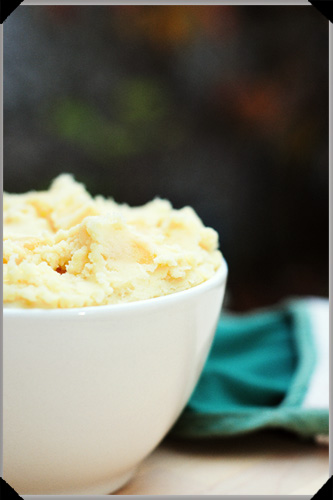 It seems only appropriate that I should follow all of that by dishing up some spuds – in this case, a seasonal mash involving potatoes and apples.

Now, if you are in any way unsure of this combination as a runner, then you don’t have to take my word for it. Flicking through Neven Maguire’s newly released and beautifully produced MacNean Restaurant Cookbook (kindly sent to me by Gill & Macmillan, whom I think may be trying to kill me with cookbooks) – I see that, amongst other potato sides, he, too, includes a recipe for potato and apple purée. Come to think of it, I daresay Neven, one of Ireland’s best-loved chefs, wouldn’t be averse to including more than one form of potato on his plates, and I can’t imagine but that he would do it very well.

This, by the by, is a recipe I originally did for the folks over at potato.ie, and you can see what I had to say about it over here. The main thing you need to know when making this is that the spuds should be floury and the apples firm (the otherwise lovely Bramleys will tend to disintegrate too quickly in this case).

For the caramelised apples: