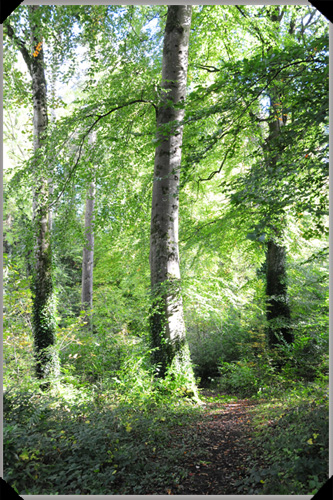 Irish woodland: beech trees abound but spuds, not so much

This weekend found me foraging about in the wilds of Co. Cavan (or perhaps the not-so-wilds, given that I was in the rather lovely surroundings of Farnham Estate). While my walk in the Cavan woods turned up all sorts of things (and I will report in full at a later date), potatoes were, unsurprisingly, not one of them. Though I am of a naturally optimistic bent when it comes to spuds (as you might, by now, have noticed), the truth is that there is very little chance of me (or anyone else) finding truly wild potatoes in this country – and the odd stray tuber that has escaped the harvest and sprouted anew doesn’t really count.

If I were to travel to Peru or Bolivia, on the other hand, it would be a different story. Though it would, no doubt, require a whole other level of both foraging and high altitude survival skills (not to mention a smattering of Spanish), it is there that I would find most of the estimated 200 or so wild species of potato, ancestors of Solanum tuberosum tuberosum – the sub-species of potato that includes all of the spuds that we know, love and eat, from the Rooster to the Russet, and all varieties in between.

No domesticated food crop has so large a clan of extant wild ancestors.

James Lang, in Notes of a Potato Watcher

And those wild spuds, as James Lang goes on to describe in his book, Notes of a Potato Watcher, are a hardy lot: “A wild potato is a survivor that has kept its heritage alive without domestication. It has withstood a thousand droughts and El Niño rains; has reproduced despite the weevil and the tuber moth; has lived with viruses, laughed at late blight and out distanced bacterial wilt. Wild potatoes are thus a treasure trove of robust genetic traits.” Lang notes that Peruvian breeder and taxonomist, Carlos Ochoa, did much to seek out, identify and classify the various wild potato species still in existence, and many of these are now in the collection of Lima’s CIP (International Potato Centre) in Peru, along with the seven other species of potato still commonly cultivated by Andean farmers and not found elsewhere. 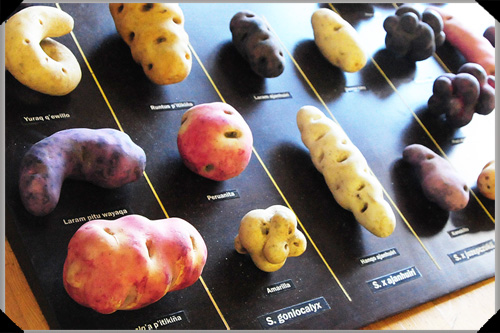 South American Potatoes, from Peru's International Potato Centre:
they may look pretty wild, but the spuds on this display board - whether bulbous, crescent-shaped,
or deeply indented - are among those still cultivated by Andean farmers

Sadly, from a purely stomach-driven point of view, wild South American potatoes tend to be an inedible sort. That means that they won’t be contending for Master Mash or Next Top Roastie anytime soon, and even if I could find them in the wild, there would be little point in boiling up some water to cook them. They are clearly, however, of great interest from a genetic point of view – with disease-tolerant traits and a knack for survival that their domesticated cousins would find rather useful – so they feed something that is entirely more important, the breeding programmes that will re-introduce potatoes to their wild side and help them to persist and thrive for many generations to come.

If you want to lend support to one such potato breeding programme, you can contribute to the Sárvári Trust’s crowdfunding appeal to support the development of their latest blight-resistant potato. The research trust, based in Wales, breeds non-GM, blight-resistant potatoes, known as Sarpo varieties, by crossing domesticated potatoes with some of those wild Solanum species that show high resistance to blight in foliage and tubers.

They have a promising new seedling and are looking for support to fund the extensive testing required before the potato can achieve National List status in the UK and thus be made more generally available. Given the hoo-hah that we’ve seen in Ireland this year, with Teagasc getting the go-ahead for field trials of GM potatoes, this may be of more than a passing interest to some of you. Details here.