Prompted, perhaps, by the fact that the TV series Dallas had just recently returned to our small screens, I couldn’t help but smile at the thought that I had been invited to visit an oil business run by someone with the initials J.R. It would, I fancied, involve intrigue, plenty of back-stabbing and the inevitable Oil Baron’s Ball. Or not, as the case may be. 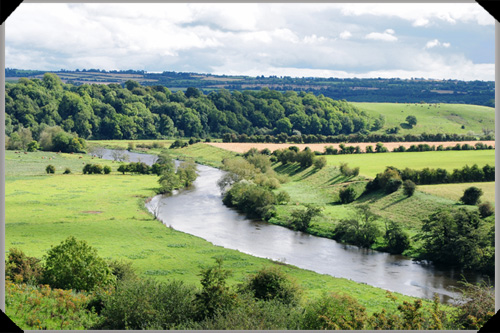 The river Boyne and its lushly green valley. No Texas oil rigs here.

Though I had (obviously) packed my cowboy hat just in case, I was not, in fact, on my way to the Lone Star State but bound for the Boyne Valley and the J.R. in question was not that legendary schemer J.R. Ewing, but John Rogers, who spent several years as the Attorney General of Ireland in the mid-1980s while the rest of us were, no doubt, watching Dallas. His is a very different kind of oil business to the Texan pursuit of black gold – it’s an enterprise based on oils that comes from tilling, not drilling. His Newgrange Gold rapeseed and camelina oils are produced from crops harvested from the Boyne Valley and cold-pressed on his own farm. 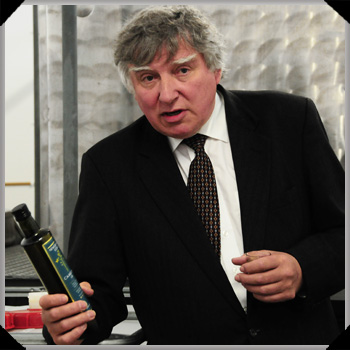 John Rogers: this J.R. is a very different kind of oil man

A practising barrister, John is, as he would say himself, “still tangled up in the law,” but has also maintained his farm here in Meath for many years. His son Jack (yes, another J.R. and, as it happens, another barrister) is one of the others who lends a hand in the family oil business. In common with many small-scale food producers, John exudes real passion for what happens here on the land and has been involved in all aspects of bringing his Newgrange Gold oils to the market since starting the project about two years ago. He spoke about the elemental nature of being involved in producing something, literally from the ground up, and captured it succinctly thus: “you’re growing things but also, it grows you.” 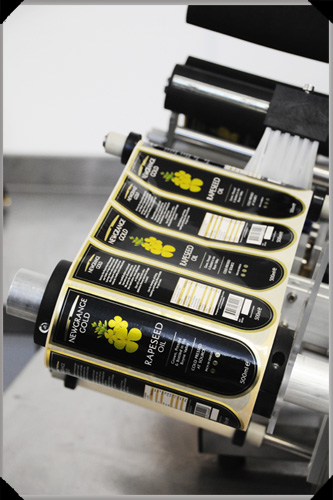 Not just a pretty label:
Newgrange Gold oils are pressed, bottled and packed on the farm

Oil production here is a satisfyingly holistic and environmentally friendly process: seeds are harvested, separated from any chaff and the oil extracted using a small press which can handle about 250 litres per day. The oil sits in a stainless steel tank for five days to allow any sludge to settle, after which the oil is sucked out, pushed through a filter and bottled. The by-product of pressing (the so-called rapeseed cake) is used for animal feed, the chaff is used for animal bedding and the sediment left after the oil has settled is put back onto the land. There is – and John is emphatic on this point – no adulteration, manipulation or deodorisation of the product. Doubtless there is no Dallas-style double-crossing either – these oils will succeed or fail based on their quality and taste alone. 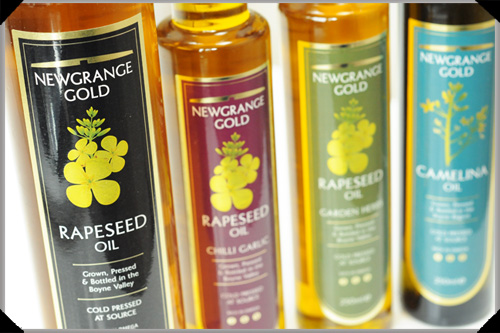 And so, how do they taste?

– My favourite, the flagship rapeseed oil is wonderfully nutty – peanutty, in fact. I fancy using it for dressings and as a dip with some proper bread.

– The chilli garlic rapeseed oil delivers a good hit of both chilli and garlic and is a definite option for trickling over the nearest pizza.

– The rapeseed oil with garden herbs is infused with parsley, thyme, sage and lemon – a worthy candidate for making roasties, methinks.

– The camelina oil is greener in hue and in taste than the rapeseed oil. The camelina from which it is derived, also known as false flax, wild flax or the alluringly-titled ‘gold of pleasure’, is an ancient plant and a member of the mustard family. It’s a strongly flavoured oil, so gently does it. It’s also endowed with exceptionally high omega 3 levels (almost three times that of the rapeseed oil) and has a good balance of omega 3 and omega 6, so even very small amounts pack a nutritional punch.

Of course, you can always check over here to see where the products are available and judge for yourself. Alternatively, if you’re John Rogers, you might get the dynamic duo behind the Eastern Seaboard restaurant, Jeni Glasgow and Reuven Diaz, to play with the oils and see exactly what they come up with. 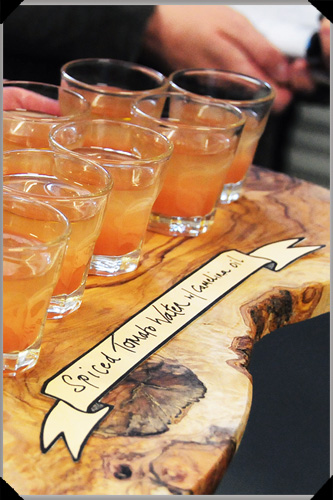 Spiced tomato water with camelina oil:
bet they never had any of that in Southfork

So it was that attendees were treated to Jeni and Reuven’s entirely unusual and faintly gazpacho-like spiced tomato water with camelina oil, followed by a lunch which included, among other things, lobster roll with rapeseed aioli, corn chowder with chilli-spiked rapeseed oil, Tamworth pig’s cheek terrine with rapeseed oil poached baby vegetables, carrot cake with a camelina frosting and an utterly more-ish chai-like sweet and spiced rape and camelina seed infusion. It was a tour de force and a meal fit, I would think, for an Oil Baron’s Ball. Glad I packed my cowboy hat after all. 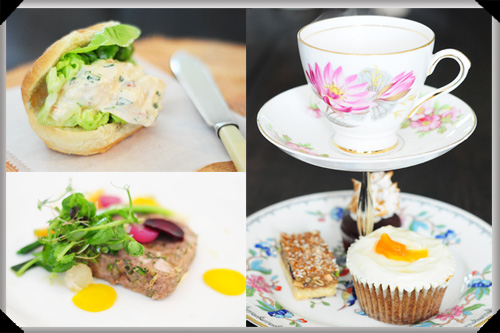