Well now, with a statement like that, you may forget all notions of humble spud-hood. The description, by food historian Regina Sexton, of the potato as a flirty little number, luxuriating in the company of fats, absorbing and carrying their flavour, must surely resonate with anyone who has ever enjoyed crisp-then-creamy deep-fried chips, the golden crunch of goose-fatted roasties, the molten glory of buttery baked potatoes, the creamy ooze of a gratin Dauphinoise or even the odd bag of Tayto.

Regina – author, among other things, of A Little History of Irish Food – was just one of the speakers at an evening dedicated to all things potato at Liss Ard Estate during the recent Taste of West Cork food festival, and she made the comment as she described some of the earliest potato recipes found in Ireland. Though potatoes as prepared by the poor had few, if any, fats to flirt with, their culinary treatment was markedly different if you were wealthy, and some of the earliest known Irish potato recipes were for sugary, buttery potato pies and puddings prepared for the gentry in their big houses. The earliest Irish potato recipe that Regina has found is for just such a pie by Dorothy Parsons, from a 1666 recipe manuscript from Birr Castle. The pie, filled, among other things, with potatoes, rosewater, currents, raisins, orange peel, cinnamon, white wine, egg yolks and sugar, treats potatoes as more fruit than vegetable. It displays, Regina says, a classic medieval palate, with a mixture of sweet, savoury and spice all rolled in one and, as you can imagine, I’d be curious to try it. At least once, anyway.

In addition to Regina’s lyrical descriptions of how we prepared and ate potatoes in times past, the Liss Ard event featured presentations which ran the gamut from pre- and post-famine history with Éanna Ní Lamhna, to advances in modern potato science with Eoin Lettice and the observations of seed saver Madeline McKeever on organic growing and blight-resistant varieties. There were, in addition, tables heaving with locally made potato dishes (though sadly nothing quite like Dorothy Parson’s pie). 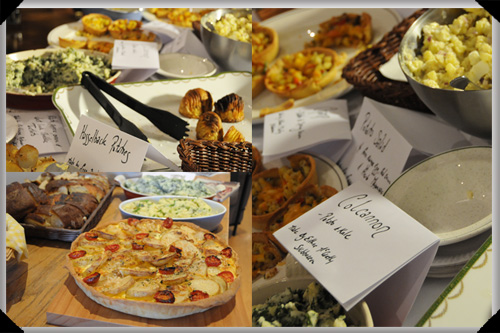 Now that's what you'd call a feed of spuds

What’s a potato? Not much. A bit to feed the soul.

From ‘Echoes of Ireland’ by Brian Petti

The evening closed with the local Skibbereen Drama Society presenting “Echoes of Ireland” by Brian Petti, a series of monologues tracing an Irish family from the aftermath of the Famine to New York in 2001. It begins with a man who has survived the Great Hunger, opening thus:

Have you ever been hungry? Not that late for supper growl you get on your way to a meal, no. I mean the in-your-bones hunger, the kind that nary lets you think of aught else. The two days since and for all you know two days hence type. The hunger stirred in the pit of your belly, borne of far too many days providing less than what a belly requires, less than what a proper soul depends upon to thrive. Have you known that hunger, lads?

With bellies full to bursting, having eaten of pies and mashes and tarts and cakes, those opening lines gave myself and the rest of the audience more than a moment’s pause for thought. In contrast to my desire for Ms. Parson’s pie, an absence-of-potato hunger is something I never, ever want to taste. And as long as I have potatoes to flirt with, there will be recipes, like this one, to make. 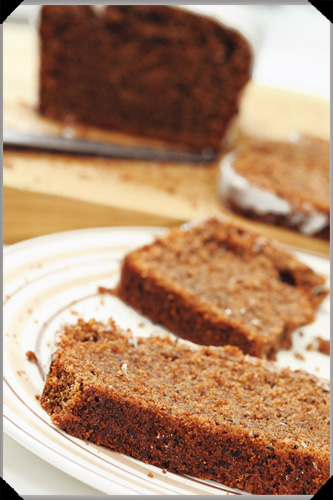 Firstly, I must apologise for disappointing those who were secretly (or not so secretly) hoping that I might have a bash at Dorothy Parson’s potato pie right here and now (and trust me, I would like nothing better that to give it a whirl, so watch this space). No, though potatoes are given the sweet treatment here, this an entirely modern recipe, where the potato consorts with chocolate and the usual cake suspects, lending moistness to an entirely satisfying chocolate cake.

It’s by no means the first chocolate potato cake that I’ve made – this particular recipe is an adaptation of one I saw being made by Skibbereen local Eithne McCarthy for the potato event in Liss Ard. The original recipe comes from The Best of Irish Cooking edited by Rosemary Moon. I’ve retained the basic method, but played with the balance of sugar and potato, changed the spicing and added an entirely optional lemony icing. The result feels like a keeper to me.

For the icing (optional):