Well now, this is clearly not so much Spud Sunday as it is Tuber Tuesday. Sorry to keep yiz all waiting but, in my defence, I offer up two words: Electric Picnic.

The mammoth festival of music, comedy, craft and sheer spirit, which made its annual descent onto the midlands village of Stradbally this past weekend, is one which draws you into another world for three days, where nights last forever, days start slowly, and wellies are de rigeur. Spending the weekend as a judge for the food awards at the event – which prides itself (among other things) on bringing a better standard of festival food to the 30,000+ electric picknickers – might just be the jammiest gig in town. Suffice to say that I didn’t need to be asked twice if I wanted the job and, along with the legend that is John McKenna of the Irish Food Guide, we munched and crunched our way through the best of the festival grub and deliberated over who was dishing up the good stuff. Given the quality, range and value that was on offer, it was a tough job. Really. Whether it was the hearty, seafood-filled Rathmullan coddle from Rathmullan House in Donegal or the sausage and egg breakfast baps from Offaly-based Organic Kitchen or the honeycomb ice cream from Featherbed Farm in Wexford or just about anything from the local ladies of the Stradbally Country Market, there was plenty to please the picnic-going tastebuds.

As if that wasn’t enough, there was also a full programme of events in the Picnic’s dedicated Theatre of Food, with cookery demos and talks on a range of topics from caking and baking to micro-beering and chocolateering. It was the place to find both food heads and pig’s heads (though not necessarily in equal measure) and it was also host to Jack and Tim McCarthy’s black pudding show, featuring the creation, by chef Troy Maguire, of a truly vampiric bloody Mary.

In the end though, and sporting a muchly loosened belt as a result of my weekend endeavours, there were decisions to be made and gongs to be presented, and I was more than thrilled to present our Judges’ Award to Seáneen and Colin from L. Mulligan Grocer / W. J. Kavanagh’s. Clearly fearing that I would miss my local while away for the weekend, and in a consequent act of extreme thoughtfulness, they had popped up, complete with trailer and white spider tent and, in their first Electric Picnic outing, served up their fabled scotch eggs, bangers and mash, mac and cheese and chickpeas of loveliness in the heart of the picnic’s Mindfield arena. 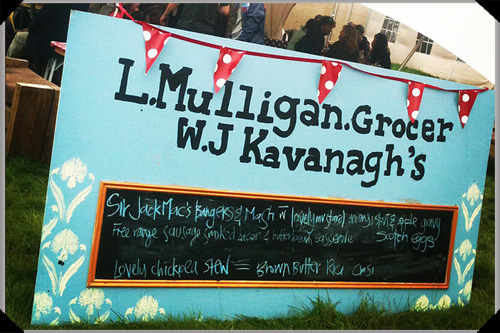 The Mulligan's / Kavanagh's EP Pop Up

There were other presentations too, with Natasha’s Living Food bagging the Best Dressed Award for the setting in which they served their dynamic raw and vegetarian cuisine (and for creating something as delightful as a cashew nut cream cake with mixed berries and beetroot). The On Our Doorstep Award, for those cooking and serving the best local foods, went to the Westmeath Food Network, who included Rogan’s Smokehouse, Lough Owel Beef, Lilliput Lodge and Barba Goat’s Milk Ice Cream. Yoshimi Hayakawa of Galway’s Wa Café got the nod for Best Vegetarian Cooking with vegetarian sushi and miso soup served up from a tiny stand in the Mindfield arena, while the Thai and Vietnamese fare from Dublin’s Saba restaurant got the people’s choice Picknicker’s Award for the second year running, based on votes collected from festival-goers. 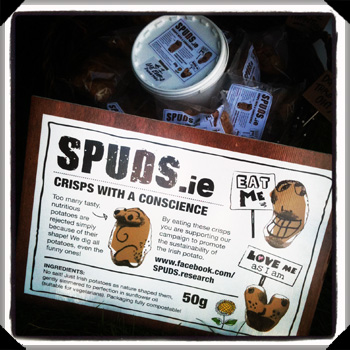 And finally, where would a picnic be without some spuds, eh? (be honest now, you knew something like this was coming). A special Spud award went to Kaethe Burt-O’Dea and spuds.ie, who are conducting community-based research into the viability of naturally blight resistant potato varieties, and who turned ugly-duckling potatoes into swan-like “Crisps with a Conscience” with assistance from on-the-farm crisp makers Keogh’s. Spuds that might otherwise have been rejected because of shape or size were used to create crisps which will, in turn, help to fund work on promoting the sustainability of our national vegetable. That, my friends, made them the perfect Picnic potatoes.