Spud Sunday: This Spud’s For You

…or rather, these spuds are for one of you. 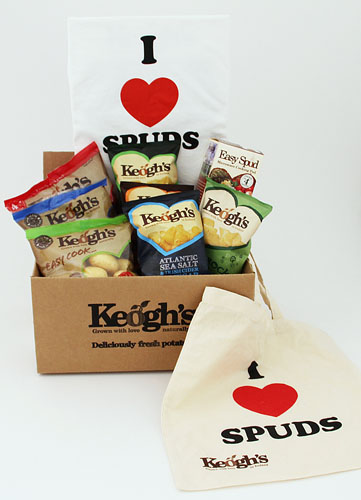 Yes, hang around here long enough and you’re likely to be the proud recipient of something spud-like, in this case a hamper of goodies – including a selection of crisps and easy-cook potato family packs – from those spud innovators, Keogh’s, whose second National Potato Day – this coming Saturday, August 25th – is nigh upon us.

The full extent of the festivities for the event will be revealed in the coming days and though – lucky girl that I am – I have been privy to a sneak preview of same, I have also been sworn to official secrecy on the matter. Suffice to say, however, that there will be no shortage of splendiferous spuddery on the day. In the meantime, while you attempt to keep the inevitable excitement at bay, there are a number of things you can do:

(1) Add a comment below sometime before midnight (GMT) next Sunday, August 26th, if you’d like your name in the hat for the spuddy hamper pictured above and if you are the proud possessor of an address in the Republic of Ireland to which it can be sent. I’ll pick a winner and notify the happy recipient on Monday August 27th and the spuds and crisps and I-love-spuds paraphernalia will be on their way.

(2) Pop over to Keogh’s and sign their petition to make the spud the official national vegetable of Ireland.

(3) To be in with a chance of other goodies, check out potato.ie and enter their National Potato Day quiz – with the rather fabulous prize of a short break for two in Catherine Fulvio’s Ballyknocken House and Cookery School, which includes one night’s accommodation with breakfast, a four course dinner (with spuds I hope!) plus pre-dinner drink as well as places on a half-day weekend cookery class. Wouldn’t mind winning that little lot myself!

Update 7/9/12: Congratulations to spud fan Aoife O’Regan, who fought off stiff competition in the selection of a number from random.org to nab the Keogh’s hamper, the edible contents of which I am sure have been well eaten by now! 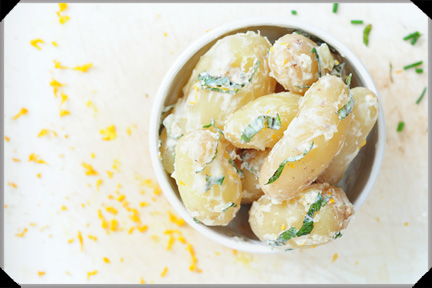 In honour of the aforementioned National Potato Day, I thought I’d leave you with a little patriotic something, inspired by those colours that you’ll find prominent in that Irish flag of ours.

The recipe for this is more or less in the title – newly boiled potatoes are tossed in a yoghurt-based dressing flavoured with fresh mint and orange zest, giving a salad gently flecked with the green and the orange of the tricolour.

When boiling the potatoes, do make sure that the boiling water is well salted, and add a few mint leaves and perhaps a few lightly crushed cloves of garlic to the boiling water to bring a little extra flavour to the pot.