A week in the life of a spud blogger, aged 3¾ (in blog years, that is - age in spud years not admitted).

Started the week by consuming a large quantity of Sunday's garlic mash. Eating one's way through substantially-sized mounds of potato is what you might call an occupational hazard (or not, depending on your appetite). I'm sure it's good training for something. Typed "world record potato eating" into Google. Reckon I could take these guys, easy.

The London Olympics have come roaring out of the starting blocks, with performances fuelled (among other things) by 232 tonnes of potatoes, which is even more than I can consume in a single sitting. As far as chips are concerned though, monopoly seems to be McDonald's Olympic game, with the fast food giant attempting to keep a tight grip on its near-exclusive right to serve Olympics attendees with those lucrative golden starches. Don't think the games goers are lovin' it.

For what is a nominally quiet time of the year, am getting a lot of things sent my way this week: notices about wine dinners, great taste award winners, harvest festivals, foodie holidays and pizza, which arrived today, unordered (these things happen, to me at any rate). 'Twas not a potato pizza, sadly - bloggers, it seems, can't be choosers.

The sample was sent by Superquinn to mark the launch of their new inhouse pizza range, made with Piero's excellent Artisan Pizza Co. pizza bases. Picked off the toppings I wouldn't have chosen and added a few of my own (hey it's pizza, you can do that). Drank an obligatory beer or two (it's pizza and you should do that). Dinner done.

The recent green-lighting of field trials on blight-resistant GM potatoes by Teagasc at their Oak Park Research Centre is a topic that's clearly exercising our Clean, Green Food Island folks. The Irish Times today published this letter from Michael Kelly of GIY Ireland on the use of conventionally-bred blight resistant potato varieties like Sárpo Mira as an alternative to going down the GM path. Unsurprisingly, I've had a few things to say about the whole GM thing myself.

Meanwhile, I heard a rumour that I would be putting in an appearance at the potato open day at the Sárvári Research Trust in Wales on Friday - they who specialise in developing and promoting the aforementioned blight resistant Sárpo varieties of potato. A rumour was all it was - though, to be fair, even I wouldn't have been surprised to find me turning up. I did check ferry times and briefly contemplated a day trip to Wales, all the same. 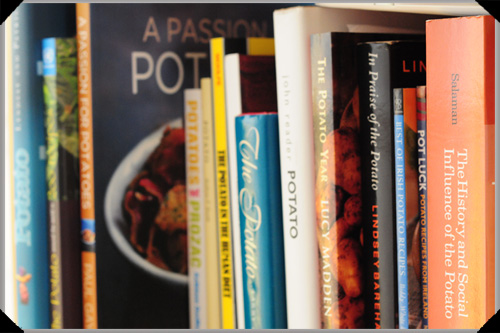 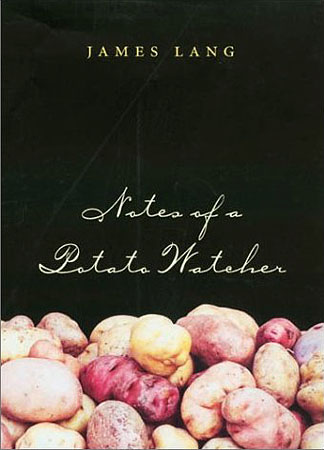 James Lang's Notes of a Potato Watcher:
another one for the Daily Spud collection

While waiting for that to arrive, there was plenty of food for thought in this opinion piece in the Irish Times by Gavin Lynch of the Organic Trust on the Teagasc GM trials, while Oliver Moore's piece in the Irish Examiner highlighted the proposed lack of toxicity testing on the GM tubers. Suffice to say that it's a story that will run and run, just like those Olympic athletes I've been watching.

Today was one of those days where I felt like eating something other than spuds (if only to make the next spud dinner all the sweeter). Got some proper corn tortillas from Bill and Sharon, who were minding Lily's Mexican Shop at the Honest to Goodness market. As Lily says, corn tortillas are to Mexico what potatoes are to Ireland, so I briefly considered starting The Daily Tortilla, before reverting to type when I found fresh harissa paste at the Natural Sauce Company stall and recalled dreamily the delights that are harissa-roasted potato skins.

Always good to end the week on a sweet note. Several friends directed my attention to this excerpt from a program which aired as part of the BBC's Collaboration Culture project yesterday, in which Peruvian chef Gaston Acurio and Spanish pastry chef Jordi Roca team up to create sweet treats using native Peruvian potatoes. Makes for some gloriously modified spuds.