While I could probably live quite well on spuds alone – and believe me, there are far worse diets than one that is predominantly potato-based – I do find that my mornings are much the better for the existence (and consumption) of good, properly brewed coffee. 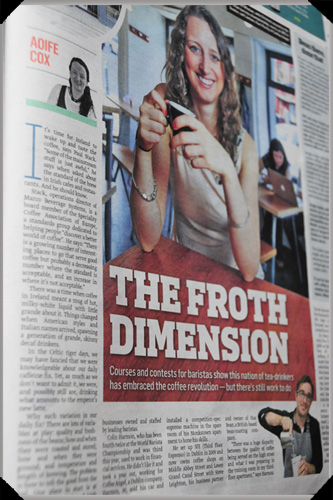 Last week's Sunday Times, where I was all about the coffee
(the article lives online, but behind the Sunday Times' paywall, alas)

It was thus my great pleasure, last week, to have the opportunity to relay, via the Sunday Times, the thoughts of some of my favourite coffee people – Colin Harmon of 3FE, Karl Purdy of Coffee Angel and Paul Stack of Marco, among others – on the subject of the variable, but improving, standard of coffee available to us here in Ireland.

It also reminded me of my first in-depth coffee tasting session with Karl Purdy a few years back, where I came to appreciate the fact that coffee is a fruit and, when not roasted into oblivion, it can have flavours and aromas that we think of as fruity. It was at that same session that I also learned (and perhaps you suspected this was coming) that there are times when coffee can have the flavour of spuds.

This “dreaded potato defect” is a phenomenon which, according to Karl, occurs in some batches of Rwandan coffee, caused by a bug that attacks and bores into the coffee beans, and is clearly one of those rare occasions when tasting of potato is not a good thing.

It is the result of a bacterial infection of the seed, usually after being bitten by an insect carrying that bacteria. Once roasted that particular bean carries very, very strong aromas of freshly peeled potato skins that is incredibly potent when you grind the coffee and when you brew it.

For the chemically minded among you, the odourous compound involved, as noted in this thread here, is 2-methoxy-3-isopropylpyrazine (I sometimes like to think that I know these facts just so you don’t have to). James goes on to say that it is a problem in several countries, but most notably Rwanda, which is capable of producing stellar coffees – stellar, that is, when not otherwise blighted by the curse of the spud.