It is a simple fact of life that people see potatoey things and think of me. A quote here, a picture there. A recipe, an article, a song, a poem, or perhaps an unusual bag of crisps. If it is in any way even vaguely potato-related then there is every chance that it will get sent my way (and bring it on I say, just as you can never have too many potatoes, you can never have too many potatoey things). 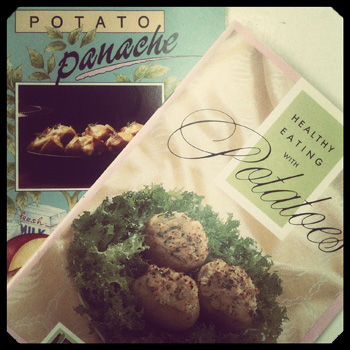 Case in point: this pair of recipe booklets very kindly sent to me by Caítríona at Wholesome Ireland. Both are probably around 20 or so years old, published in their day by An Bord Glas (the Horticultural Development Board, which has since morphed into An Bord Bia) and by the National Dairy Council. The healthy recipes booklet is dated, if by nothing else, then by its fondness for polyunsaturated everything, and also demonstrates that food styling has come a long way. The dairy council booklet, on the other hand, features (unsurprisingly) a rather large quantity of cheese. There is always something worth trying, though, and the recipe below is one that caught my eye. 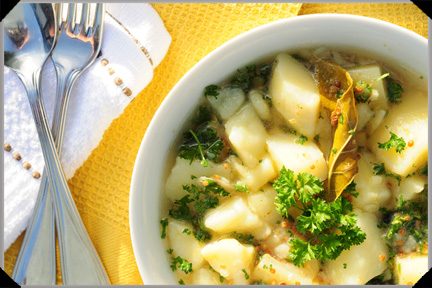 One of the more unusual recipes in the old Bord Glas ‘Healthy Eating With Potatoes’ booklet was one glorying in the title of ‘Potato a la Grecque,’ and you’ll find a very slightly adapted version of same below. As for how authentically Greek a recipe this is, I have no idea. Any references to similarly titled recipes on the web (and there aren’t that many) seem to feature potatoes roasted with olive oil, lemon and Mediterranean herbs, whereas this consists of just-cooked potatoes covered with a wine-based marinade. I wasn’t entirely sure how to place this recipe – it’s somewhere between a cold soup and a salad – but the flavours have a definite Mediterranean feel, if not specifically Greek, and it seems to me that it would bring a little bit of sunshine to any plate.