“Just because you work for Tayto doesn’t mean you know potatoes, or tomatoes or tomaytoes,” said a man from County Clare.

So runs a line from the song “The Great Potato Feud” by Pat Quinn of Inis Oírr, which describes a late night bar scene with much heated, and inebriated, debate on the matter of the best potato.

It is, as Rónadh Cox pointed out in her article in the journal Gastronomica, “a very funny song… above all funny because the idea of a pack of Irishmen quarreling about potato varieties seems ridiculous – but not impossible.”

** I must declare some interest here – Rónadh is my cousin and writing about potatoes, it seems, a family preoccupation.

I was reminded of the song because I had the pleasure of meeting Darra Goldstein this week, Editor in Chief of the aforementioned Gastronomica, who was in Dublin at the DIT School of Culinary Arts & Food Technology to deliver the keynote address at the inaugural Dublin Gastronomy Symposium. It seems a terribly grand title – and it was in the nature of the event that the papers presented were necessarily academic and, at times, esoteric – but at its heart was a group of people, brought together by a committee chaired by Dr. Máirtín Mac Con Iomaire, and whose interests, though diverse, centered on food – that which nourishes and enables us all to simply be.

The full list of papers presented on day one and day two of the event provide substantial, and varied, food for thought – though, if attendees at the symposium were given to viewing things through a “food lens”, as John Mulcahy from Fáilte Ireland described it, then I, undoubtedly, applied my “spud lens” to all that was before me.

I was struck, for example, by a presentation on the versatile Brazilan staple of cassava by Claudia Martello, in which she made mention of the Instituto Maniva, a Brazilian organisation which promotes the use of cassava through TV documentaries, cultural events and projects, educational and agricultural programmes, involvement with local chefs and with the Slow Food organisation. 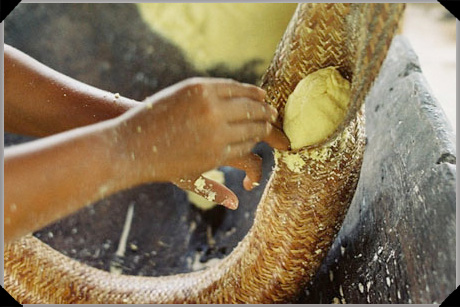 As cassava is to Brazil, so potatoes are to Ireland, but – Bord Bia and their potato.ie efforts notwithstanding – we have no equivalent promotional organisation focused on the potato. I wondered idly if such a thing as the Potato Institute of Eireann would ever come to pass – you have to admit that, quite apart from anything else, P.I.E. would be a tremendously satisfying acronym.

What we do have are potato breeders, several of whom have made a significant impact in potato terms. Pádraic Óg Gallagher talked, in his session, about the lengthy, and expensive, process involved in producing a new commercial potato variety (which, these days, can take over ten years and cost from €700,000 to €800,000). He also told us of legendary breeders, such as Dr. Harry Keogh of the Teagasc Oak Park Research Centre, whose successes included the Rooster, which was launched in the mid 1990s in Pádraic Óg’s restaurant, Gallagher’s Boxty House, and is now the dominant potato in the Irish market, accounting for 70% of sales. 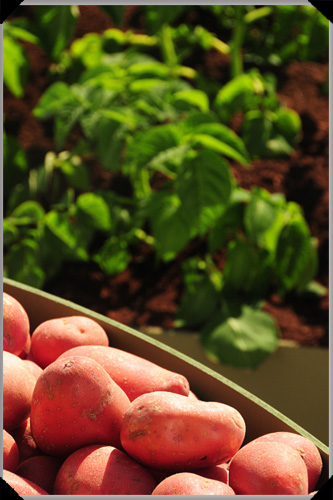 Irish-bred Roosters - our most popular spud

John Clarke, Pádraic Óg reports as having been Ireland’s most prolific individual potato breeder, having bred 33 certified varieties, starting in the 1930s – most of these varieties had the prefix “Ulster”. A very gifted and highly respected breeder, he was awarded an OBE in 1969 for services to agriculture, and some of the most successful potatoes of the 20th century are descended from his “Ulster” varieties, including Britain’s most popular potato (and chip shop stalwart) the Maris Piper, bred in 1963 from a cross with “Ulster Knight”.

Pádraic Óg noted also that while expert potato breeders down through the years have often stumbled upon their skill by accident, hobbyist potato breeding has now largely died off here, in large part due to the cost of getting a new breed officially listed. I wonder what our great potato feuders would make of that.