“I’m a Swede, I never buy potatoes in Ireland.”

So ran the subject line of an email I received a while back from a Swedish reader who was clearly very exercised by the all-too-frequent sight in of potatoes lying exposed to daylight in Irish shops. “Spuds should be kept in darkness,” he protested, “they develop poisonous solanine in daylight” and he was emphatic about not being prepared to buy potatoes thusly displayed at any price.

And my Scandinavian correspondent, I have to say, had a point. 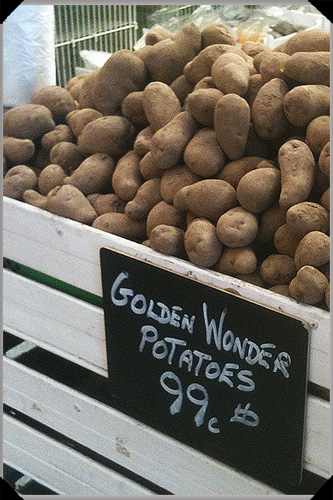 And lo, exhibit A: Golden Wonders on display

Solanine, a bitter and toxic alkaloid, does occur naturally in potatoes – they are related to deadly nightshade, after all – though levels will vary depending on the potato’s variety and maturity. It doesn’t need light to form, but the rate of production of solanine in potatoes will increase with exposure to light and UV radiation, so it is always better for potatoes to spend their storage time in the dark. The greening you may see on potatoes – which results from the formation of chlorophyll and which also develops under daylight conditions – is an indication of increased levels of solanine, and I heed the advice from my Ma, who always told me to cut out the green bits of a spud (though the fact is that the average person would need to consume around 2lb of green potatoes in one sitting to be at risk of developing solanine poisoning). Even without greening, if a potato has developed a bitter taste, it’s another indicator of potential toxicity and, as your taste buds will probably tell you, you should steer clear.

Mostly of course, solanine levels in our spuds don’t get to poisonous levels – if they did, we, as a potato-eating nation, would surely know all about it. However, in the onward march of progress which has meant that we are now far more likely to bag a few well-lit roosters from the shelves of our local supermarket than to buy the ten stone sack of old, we are, in all likelihood, getting higher levels of solanine into the bargain. My reader is right to be disturbed by how we present our spuds for sale, and so should we be too. We owe a duty of care to our spuds and, more to the point, we owe a duty of care to ourselves.

Inspired by my Swedish correspondent’s concern for spuds, I thought it only proper to round things out, if not with some actual Swedish spuds then, at the very least, with a Swedish spud recipe. To be honest, I’ve had my eye on this traditional Swedish dish ever since I saw Donal Skehan prepare it on one of his Kitchen Hero TV shows. I was well pleased when I went along to the launch of his latest book this week – his third volume of recipes, no less – to find the recipe included. 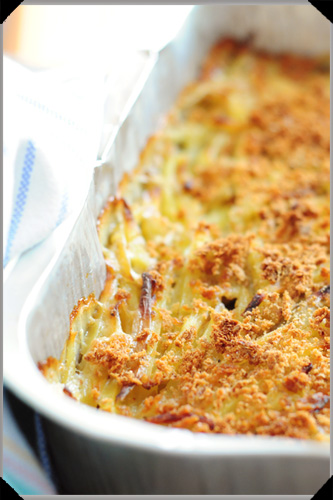 You can think of it as a kind of Swedish take on gratin Dauphinoise, featuring matchstick potatoes, anchovies and onions baked in a mixture of cream and anchovy brine. It’s a wintry kind of dish, which is appropriate for the unseasonably cold weather with which our so-called summer has started. it goes without saying that, as is my wont, I have made a few slight adaptations:

– The recipe calls for Swedish anchovy fillets, which, the internet tells me are not, in fact, anchovies at all, but sprats, usually preserved in a liquid which is more sweet and aromatic than salty, and are somewhat like anchovy-sized rollmop herrings. Use them if you can find them – IKEA is probably a good bet for those of you not actually in Sweden – I used some Italian anchovies instead, ‘cos that’s what I had.

– I used about half the amount of onions called for in the original recipe – this is simply what felt right to me, but do add more onion if it’s to your taste.

– If your anchovies are stored in oil rather than brine, just add a tblsp or so of the oil to the gratin liquid, rather than the brine.

…or of Swedish-inspired names at least, Smörgasboard is a board game for food quiz enthusiasts being developed by Irish game designers RichArt. The idea is for players to become aspiring chefs for the evening, as they work their way around the board and through a foodie word jumble, a drawing section, a describing round and foodie general knowledge in the race to become the first team of chefs to graduate from Rick’s Culinary Academy. 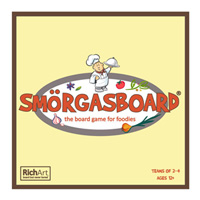