Bizarrely enough, it was a car park that I had, at first, been most excited about as I set off on my travels to Limerick.

Not just any old car park, mind, but the Potato Market Car Park (the clue to my excitement was, of course, in the name – I am nothing if not predictable in the matter of all things tuber). Established on the banks of the Shannon in Limerick around 1843, the Potato Market’s primary purpose has not, however, been as a place of trade in potatoes or any other commodity for quite some time. Though the market buildings were refurbished in the 1980s, the riverside location mainly functions as a place in which to park – though admittedly it’s somewhat picturesque as car parks go – with a series of open bays lined along the river and a footbridge leading to the Hunt Museum in the old Custom House building on the opposite bank of the Shannon. Though there was nary a spud to be seen, I think, perhaps, that I just like the fact that Limerick once had such a thing as a Potato Market, even if I can only imagine, fancifully, what it might, at one time, have been like. 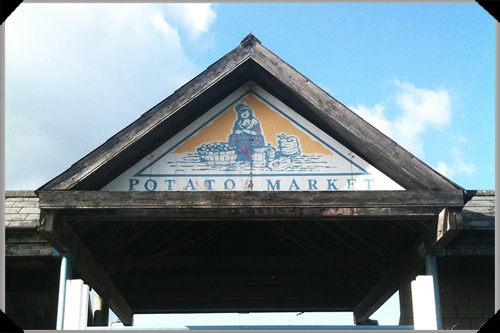 The Potato Market, Limerick: nowadays, the only spuds you'll find are the ones in the signage

There’s no need to resort to imagination when it comes to experiencing the bustle of trade in Limerick’s Milk Market, however. Officially established over 200 years ago and nestled in the heart of the city, it remains true to its trading purpose. Having undergone a number of refurbishments in recent years – the most recent of which capped the open market space with an impressive tented roof and added a new food pavilion – the market, and especially the food market on Saturdays, teems with life. When I was there, I gravitated to Peter Ward’s Country Choice, an outpost of his Nenagh deli and café and a showcase for all that is good in food. To shop here is not simply to exchange money for goods but to learn from Peter, if you care to, about the people who have reared that cow, milled that flour or pressed that rapeseed oil. Passion is a common thread which links the traders here and makes this a market that truly connects food to people and, erstwhile potato markets aside, it was food and people that had brought me to Limerick in the first place. 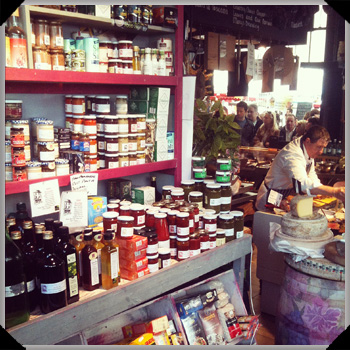 Officially, I was in the city to attend an evening at the aforementioned Hunt Museum, organised in advance of Limerick’s upcoming Love Gourmet Week, and which would showcase some of the best of the region’s restaurant fare. The Love Gourmet Week initiative – which will see specially priced menus promoting the best of locally sourced produce at some of Limerick’s finest dining establishments – goes beyond simply wanting to fill restaurant seats, and acknowledges the need for a co-operative effort in order to mark out Limerick’s place on the Irish food map. The Hunt Museum event made that mark in style (and you can see photos of what it all looked like over here).

Over the course of the evening, we dined in a high-ceilinged room once used for the same purpose by ship captains of old, with walls graced by fine Irish art and in the company of people passionate about food, and about Limerick. Though Limerick can get a bad rap at times, ‘the history of the city far outshines the other in-betweens,’ said Nigel Bridge, who delivered eloquent introductions to each course, and we were also treated to an enthralling excerpt from Pigtown, reflective of an era in Limerick’s history where the pork butcher was king and ‘there was nothing left but the squeal.’ Our tables were named after Limerick’s old bacon factories – Denny, Shaw, Matterson and O’Mara – and we dined on six masterfully executed courses: Limerick ham hock and chicken terrine with nettle cream from The Mustard Seed, pan-fried brill with pea purée and bacon jam from The River Bistro, fillet of beef – as reared by 5th generation butcher Noel O’Connor, who sat just across the table – and as prepared by the chefs from the Cornstore. There were more desserts, cheeses and petit fours than you could reasonably eat (but we did anyway) and the event was graced by a spirit of genuine hospitality and warmth. The most generous serving of all, however, was that of reasons to return – I now have much more than the Potato Market to get excited about.

A week may be a long time in politics, but it seems that it is also a long time in the case of Love Gourmet Week 2012, which runs from Friday, June 1st to Sunday, June 10th. That means not just a week, but a whole ten days in which to visit some of the finest restaurants in Limerick and the Shannon region, and to avail of specially priced menus, from €35 per person, which will feature the best of local produce.

Participating restaurants in Limerick city include Azur and The River Bistro, both on George’s Quay, Brasserie One at No. 1 Pery Square, The Hamptons at the Savoy Hotel, River Restaurant at the Strand Hotel and the Cornstore on Thomas St. Beyond the city limits, you’ll find The Carriagehouse Restaurant in the Adare Manor Hotel, The Mustard Seed at Echo Lodge in Ballingarry and the Cherry Tree Restaurant in Killaloe all taking part.

During the event, Irish Rail will run a Love Gourmet Week special, with online sale of one way fares between Dublin and Limerick from €14.99 on all train services in both directions. You’ll need to book those fares at least three days in advance of travel, so ‘twould be no harm to start planning your trip to Limerick now. You might, while you’re in the vicinity, also like to check out the Belltable Community Theatre’s performance of Pigtown, Mike Finn’s captivating play about life in Limerick, featuring, among others, tales of butchers, priests, shoe-thieves and one-legged soldiers, and which runs between June 5th and June 23rd.