So reads an entry made just three weeks ago today in the diary that sits on the table beside my Dad’s armchair.

Said spuds are the ones that were planted by Dad’s good friend and neighbour, John’O, in my parents’ greenhouse, after what was probably a good deal of friendly, if characteristically unsubtle, prompting from Dad. Though he himself was no longer fit for the kind of physical exertion involved, he remained, nevertheless – and as his career as an army officer and community fundraiser par excellence had always demonstrated – a supremely able director of operations. He was pleased as punch at the thought that he would have new potatoes in May – around the same time that he expected news of a much anticipated great-grandchild – and, while he needed no preparation for news of family arrivals, he had advised John’O to get the garden fork from the garage and leave it in the greenhouse, ready to lift the spuds when the time would come. 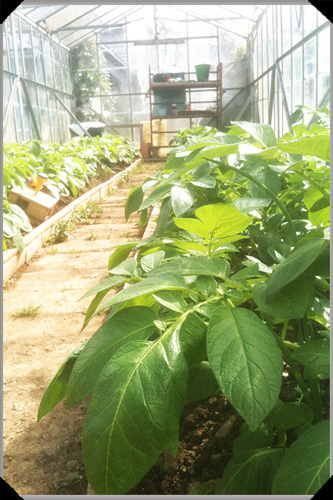 Yes, the potatoes in the greenhouse are indeed up

In the end, though, Dad’s time came first. While the potatoes continue to grow apace, he will not sit down with us to enjoy this year’s extra early harvest, nor will we hear him laugh while John’O reminds him that, sure, they weren’t his spuds anyway. Just over a week ago, peacefully and surrounded by those who meant most, the Guinness man, the potatoes man, the man with unusual breakfast habits, and my most beloved father, slipped away. 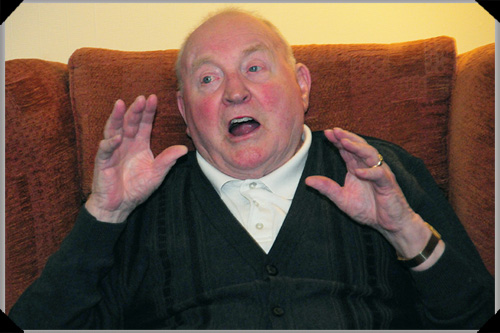 Dad giving forth, as was his wont

He leaves a larger-than-life gap, which we will cram with memories. He leaves a life well-lived, for which we are grateful, and more. And though we stay behind and gather the harvest without him, we will keep for him, always, a spud or two in store.