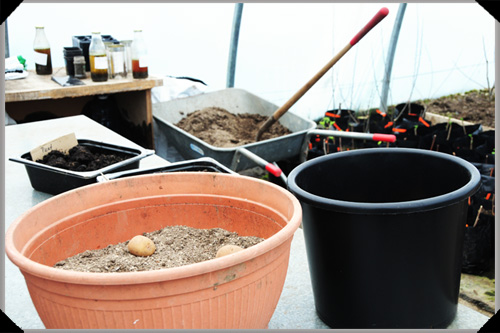 March is here and that can mean one thing, and one thing only to a spud: that it’s time, once again, for the Organic Centre’s annual Potato Day. Time to meet my buddy Dave Langford and his rare, old and unusual potatoes, time to top up the ol’ seed potato stocks in advance of planting and, this year, having spent the past three years as a more-than-interested observer at the event, time for me to stand up and speak. 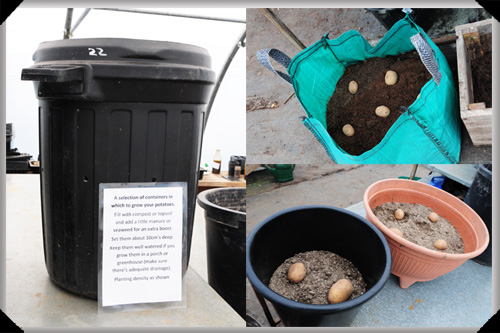 As part of the program for the day, Hans Wieland, under whose able stewardship the centre is run, asked me to say a few words about the supposed decline in the popularity of the spud hereabouts, something which I have had cause to mention on these pages before. While it was, given the occasion, a case of preaching to the converted, I hope people got the message that it’s not all doom and gloom for the potato. In a move shamelessly stolen from Pádraic Óg Gallagher of The Boxty House, I had a 5.5kg bag of spuds passed around the room, roughly equivalent to the average daily adult intake of potatoes in Ireland around the time of the famine. Compared to that little lot, you could say we’re all eating less spuds than we used to, though, if the powers-that-be want to reverse the present downward trend in sales of fresh potatoes, they will need to engage in some creative marketing and education to remind people of just what a versatile and nutritious addition to our diet the potato is. 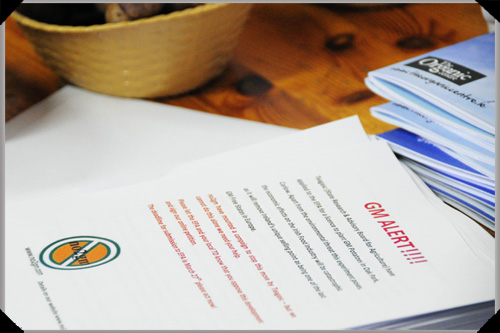 Some serious spud business up for discussion

I was also much interested in one of the other talks which took place at the event, with organic farmer John Brennan, of the No To GM campaign, speaking on the subject of the application by Teagasc for a license to conduct outdoor trials of GM potatoes here in Ireland. Concerns were raised, among others, about the necessarily limited range of parameters which the trial could test and the unpredictability of outcomes under other soil conditions, not to mention the ill-advisedness of going down the GM route when Europe has a distinctly anti-GM food bias. Dave Langford, no great fan of GM methods either, also had some words to say on the subject of biodiversity, the sad demise of the James Long Keeping onion as an example of diversity lost, and the dangers of dependence on an ever-reducing set of species for our food. 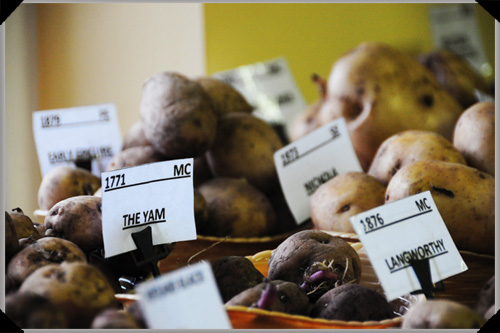 Biodiversity in action:
a tiny fraction of Dave Langford's 300-strong potato collection,
including the Yam, a maincrop potato dating from 1771

Anyone interested in voicing their concerns about the proposed GM trials can add their names to a petition against the GM move and are recommended to do so soon, as the deadline for submissions to the Environmental Protection Agency (EPA), to whom Teagasc have applied for the relevant license, is March 27th. So, if the issue moves you, then get moving.

If you’re of a mind to grow potatoes and you missed Potato Day (or even if you were there), you might be interested in a potato planting weekend at the lovely Rathmullan House in Donegal, planned for the 23rd and 24th of March next.

As part of their celebrations to mark 50 years of their Irish country house hospitality, 50 varieties of potato will be planted in the walled garden at Rathmullan House. Participants at the potato-themed weekend will get the low-down on sowing various varieties of tuber from Rathmullan’s gardener, Joe Whelan, and will be able to take home some lesser known varieties to plant, including Highland Burgundy Red, Salad Blue, Picasso, Arran Pilot, Ulster Sovereign, The Bishop, Catriona, Pink Fir Apple, Shetland Black and Home Guard. The potato theme will also be reflected in head chef Kelan McMichael’s menus throughout the weekend.

Visitors will also be invited back for a harvest event, where the plan, I’m told, is to lift the simple spud to new culinary heights (count me in for that one, says you!). The cost for two nights B&B and one dinner at Rathmullan House during the potato planting weekend is €180 per person sharing.