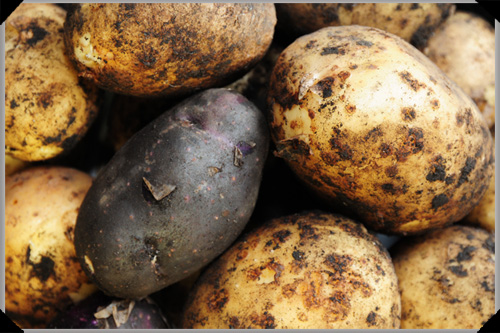 Cue an impassioned response from those of an anti-GM persuasion – it’s always been an emotive topic (and, given our particular history with the potato, blight can be an emotive topic too). Teagasc stand firm on the fact that their work – which is funded by the EU and does not have links to any food or seed companies – is not about testing commercial viability but about “gauging the environmental impact of growing GM potatoes in Ireland and monitoring how the pathogen, which causes blight, and the ecosystem reacts to GM varieties.” They have also taken precautions in terms of isolating the proposed test fields from other crops, while the Farmer’s Journal say that they will ask Teagasc scientists to respond to all specific GM concerns raised.

Those on the other side of the argument would prefer it if Teagasc stuck to their conventional potato breeding programs. Regardless of the ways in which GM may or may not have moved on in recent years, a distrust of GM remains common, based on the idea that we’re interfering with nature and that there’s an inherent unpredictability in what might result. Seamus Sheridan, he of Sheridan’s Cheesemongers and also agriculture and food spokesperson for the Green Party, is of the opinion that such a move flies in the face of Ireland as being the green, natural food island. There’s little point, as he sees it, in being able to more reliably produce a potato that consumers will ultimately shun because it comes with a GM label. It, equally, does not solve or even address the bigger problems facing potato growers, many of which relate to the sheer difficulty of making any kind of a margin with the prices being paid to them by supermarkets. Who will win the day, I don’t know, but you can probably guess where my heart lies.

‘Tis far from GM spuds you’ll be if you head to the annual Potato Day at the Organic Centre in Rossinver, Co. Leitrim next Sunday, March 11th. This year, they are marking 15 years of Potato Day with a free event which will include advice on varieties, planting demonstrations, Dave Langford’s heritage potato collection, guided tours, guest speakers, seed potatoes for sale and more.

If you want to get some idea of what to expect, you can click through to read all about what happened last year, the year before and even the year before that. And before you ask, of course I’ll be there this year. Silly question.