When it comes to potatoes, I’ll try anything once, and that includes Heston Blumenthal’s potato milk jam.

As Heston’s recipe over on the Channel 4 website [1] explains, milk jam is better known as dulce de leche (it certainly sounds better when you call it that too). It’s also better described, not as a jam, but as a kind of caramel sauce, one that is, in this case, flavoured with potato skins (I realise at this point that many of you will – perhaps understandably – have run for the hills; for those who are still tuned this way, your reward will be sticky and very sweet). 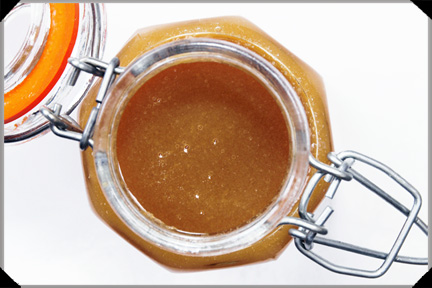 Potato Milk Jam - as one of the guests on Heston's show said,
it sounds like the first 3 lines of a shopping list

The recipe – which involves cooking roasted or baked potato skins with milk and sugar for a couple of hours – is utterly simple; the mental leap required to get past the use of potato in something dessert-like is, for many people, considerably harder. I will admit that even I was hedging my bets on this one, quartering Heston’s original recipe so as not to end up with a truckload of sauce that (shock, horror) I might not want to use.

I needn’t have worried – though it is unusual and has an earthy undertone you don’t expect to find in a caramel sauce – I’ll find excuses to use it alright. Heston says to use it as a sweet dip or on toast. I say use it on potato pancakes (perhaps with a bit of melted butter) or, given how well potato and apple work together, try it with some apple tart and vanilla ice cream.

Regarding the recipe itself, the Channel 4 website calls for the skins of some baked potatoes, while on the TV show, Heston used potato skins roasted in some oil and salt. You can use either – with the plain baked potato skin which I used, I did find that I needed to add a little salt to the sauce at the end to temper the potato flavour.