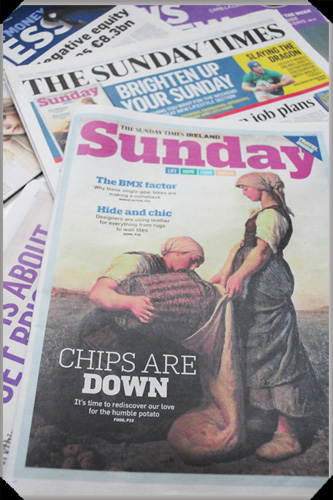 “that which was heretofore reckon’d a food fit only for Irishmen, and clowns”

So wrote English garden designer Stephen Switzer in 1733, reflecting a popularly held opinion of the time. He was referring, of course, to potatoes, which were not much liked in 18th century England. They were the food of the Irish and food of the poor.

In a 1998 episode of The Simpsons, that modern-day clown Homer Simpson, a sack of potatoes slung over his shoulder and whistling an Irish air, blags his way into the backstage reaches of a U2 concert by identifying himself as Potato Man. Hundreds of years may have passed, but potatoes are still seen as the food of the Irish, poor or not. The two are so closely bound, in fact, that news, last November, that the legendary Irish love of the spud might be on the wane became the stuff of international headlines.

Prompted by declining potato sales, An Bord Bia had issued a tender for market research into Irish consumer attitudes towards potatoes. The story was picked up by media outlets in Ireland and, like word of some shocking celebrity split, spread to the world news pages of the New York Times and thence to newspapers ranging from the Sydney Morning Herald to the South China Morning Post. It’s not a new story, however. The fact is that sales of fresh potatoes in Ireland have been trending downward, probably since the late ’80s. Since 2005 alone, retail sales of fresh potatoes here have dropped by 25%, according to research by Kantar WorldPanel.

Sounds dramatic, no? Lorcan Bourke from An Bord Bia advises caution: “We only have figures for the household purchase of potatoes and not the whole foodservice/catering end of the market. So figures like this would not give the full picture.” Significant also is that the figures do not include purchases of processed potato products. Liam Glennon, President of the Irish Potato Federation, whose members together handle around 75% of the potato trade in Ireland, points out that sales of processed products, often made with potatoes sourced outside of Ireland, have, in all likelihood, been on the up. “We don’t have comprehensive figures for potato consumption but I’m just saying that it’s probably not as bad as it seems.”

The point remains, though, that we’re not buying bags of spuds like we used to. It might be tempting to view this as some kind of psychological break with our past, but is it perhaps just the case that plain old spuds are seen as plain old-fashioned? Undoubtedly, potatoes have had to put up with a lot more competition from other carbohydrates, and the anti-carb sentiment engendered by certain diets in recent years will have done sales of potatoes no favours. Is it, therefore, natural to expect the downward trend to continue or is there a path back for the fresh potato? Can we Irish re-invent the spud?

We can, according to Pádraic Óg Gallagher, but it’ll need “marketing, marketing, marketing and education.” Pádraic Óg is the owner of Gallagher’s Boxty House in Temple Bar in Dublin. With a menu based around traditional Irish boxty, the restaurant, which has been in operation for over 20 years, goes through more than a tonne of potatoes per week. “We don’t make eating potatoes look sexy enough,” he says. “Look at how pasta and rice are marketed – through sauces.” Sexy and saucy – ’tis a far cry from the spud image of old. Pádraic Óg also stresses the importance of education “because the humble potato is a much superior carbohydrate to processed pasta or rice – personally I will toss baby potatoes in a pesto sauce for a dish that is as convenient and far more nutritious than either fresh or dried pasta.” 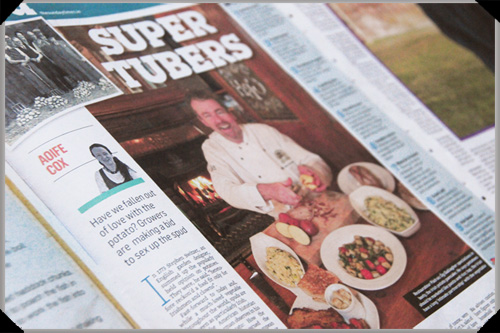 The inside scoop on spuds, including Fergal Phillip's great picture of Pádraic Óg Gallagher at Gallagher's Boxty House

Convenience, or the perceived lack thereof is, according to An Bord Bia’s Lorcan Bourke, the big issue that the potato industry here needs to tackle. “Potatoes are still our number one carbohydrate,” he says, “and consumers regard potatoes as nutritious and as a value for money product, but convenience is a very big issue for them.” He says that growers here are looking to address this issue with new and innovative products. “It will take a few years, but we’ll crack it,” says he.

But crack it how, exactly?

One company taking a very pro-active approach is Keogh’s, based in North County Dublin, who have developed a line of ‘Easy Cook’ steam-in-the-bag microwaveable rooster and baby potatoes, available in Superquinn, Eurospar and other independent outlets. Their 1kg pack of roosters do the easy-cook thing in around thirteen minutes; smaller 400g packs take less than ten. According to General Manager Tom Keogh, “the introduction of the ‘Easy Cook’ range has really helped to attract consumers back to potatoes, sales (of this range) are increasing 4% per month.” Marketing strategies adopted by the company have also included the launch of the first ever National Potato Day last August “in an effort to heighten younger consumers’ awareness of potatoes and rejuvenate the potato’s perceived old-fashioned image – it worked extremely well and we hope to build on this in future.” Keogh’s are also members of the aforementioned Irish Potato Federation which, since 2008, has part-funded Agri-Aware’s Incredible Edibles program in primary schools. This gives growing packs and raised beds to schools so that they can grow vegetables, including potatoes. A total of 1,700 schools participated in 2011.

And growing your own spuds is certainly one way of developing a renewed appreciation for our national tuber. Hans Wieland, who runs the Organic Centre at Rossinver in Co. Leitrim, will tell you that we are not so much re-inventing the spud as rediscovering the habits of the past, with increasing numbers of us using our back gardens to grow potatoes once more. The centre runs an annual Potato Day – which takes place this year on Sunday, March 11th – and is a one stop shop for seed potatoes, potato growing advice and planting demonstrations, as well as an opportunity to see some of Dave Langford’s fascinating collection of heritage potato varieties. “Sales of seed potatoes to family growers and individuals are up or steady, that means more people have their own potatoes and buy less. In the past 3-4 years sales of early varieties have gone up, especially,” says Hans. Rumours of the potato’s demise, then, are greatly exaggerated. In gardens across the country, we’re getting back with our spuds.

And my opinion? This is the Spud’s-eye view.

Let’s start by not calling it the humble spud, shall we? Noble, mighty – these are better descriptors for what is, after all, the most widely cultivated vegetable in the world, and one with a CV that includes vast experience as a sustainer of nations. Add to that its endless versatility and impressive nutritional credentials, and the potato is a food to be reckoned with. All too often, though, our heads are turned by the alternatives available.

My solution? To persuade, as Hugh Fearnley-Whittingstall does in his latest book, ‘Veg’: “not by shouting from a soapbox, but through sheer temptation…” That is my mission at thedailyspud.com.

In practice, it can mean introducing people to international dishes, from paper-thin Norwegian Lefse (potato flatbread) to garlicky Skordalia (a Greek potato and almond dip), or using traditional potato preparations in unexpected ways. Boxty, for example, makes a great base for all sorts of things – tomatoes and some Toonsbridge Irish buffalo mozzarella on fried slices of boxty loaf would make a great Irish answer to the classic Italian bruschetta.

It can also mean celebrating the joy of Irish classics, like champ and its cousin, colcannon, while the chip butty and the crisp sambo, too, have their place. And it’s not just about recipes either. From the joy of growing weird and wonderful potato varieties, to the tuber’s fascinating history, there is much for the spud-lover to chew on.