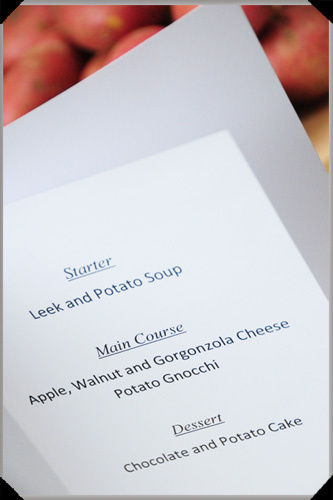 As for the lunch itself, I was, unsurprisingly, tickled pink by the all-potato menu, which Liam Glennon, president of the aforementioned federation, asked the chef at The Clarence Tea Room to prepare. Feasting on leek and potato soup, gnocchi and chocolate potato cake was as good a reminder as any that being The Daily Spud is no bad thing. In fact, it’s a very good thing indeed.

Speaking of special menus, you may be interested in one or other (or both) of the following events:

Chapter One Charity Lunch For Barrettstown

Chapter One restaurant in Dublin will be the venue for a special charity lunch on Monday 30th January. Michelin-starred executive chef Ross Lewis will present a menu inspired by the one that he prepared for the state banquet in honour of HM Queen Elizabeth II during her visit here last May (and fear not, with smoked champ potato on the menu, there will be spuds).

The lunch is limited to 80 people, with all food and wine costs being covered by Chapter One and all proceeds from tickets going to support the work of Barretstown, the Kildare-based camp designed for children who have been affected by a serious illness, primarily cancer, and their families. Tickets are available at €100 per person or €200 per person for a place at the Chef’s Table. Bookings can be made by contacting Chapter One at info@chapteronerestaurant.com or by phoning 01-8732266.

If you’re in the vicinity of Skibbereen on January 25th next and you’re of a Scottish persuasion (or even if you’re not), you’ll want to head for the West Cork Hotel, which, in association with the lovely folks from West Cork Food, will be hosting its first ever Burns Night supper.

For what sounds to me like the extremely good value price of €30, you’ll get five (or, from what my sources tell me, possibly even six) courses of fine West Cork produce crafted into a traditional Scottish meal, while the all-important haggis is being flown in from McSween’s of Edinburgh, a company that has been making award-winning haggis for over 50 years. On the spud front, meanwhile, I would naturally expect some version of neeps and tatties to make an appearance on the night. Musician Ronnie Costly will provide the entertainment for the evening and there will be recitals of Robbie Burns Poetry and, of course, a wee dram. See here for more details.