Yesterday, I decided that I should let somebody else cook the spuds for a change. Seems only fair, no?

It’s not like it was a difficult decision. Joe Macken, serial restaurateur and the man behind (among others) the ever-popular Jo’Burger in Rathmines and CrackBird, the restaurant that popped-up-and-stayed, had invited a small band of bloggers to visit his latest Dublin eatery, Skinflint, to see his operation and (of course) try the food.

To be honest, the mere fact that there was a potato pizza on the menu meant that I was in like flynn. I’m easy like that. At least when it comes to spuds. And the opportunity to eat, among others, with Aoife from I Can Has Cook, Catherine from The Runcible Spoon and Bill and Sharon from Gunternation was not one to be passed up either.

As for the restaurant, Skinflint is a cool, casual joint. Unsurprisingly, given the name, it boasts a value-for-money menu, which is based around creatively designed grilled pizzas. They make their dough using flour from Irish millers Odlums, and ferment it for three days to develop its flavour. It’s passed through a roller to create an oblong pizza base, and then grilled on a large roller grill. The toppings, which for this type of pizza must be pre-cooked, are added while the dough sits on the grill and it can all be put together very quickly. The restaurant also features a meatballs dish, which changes daily, and a one pot wonder from Mondays to Fridays, as well as snacks like hummus and an excellent beetroot caviar. 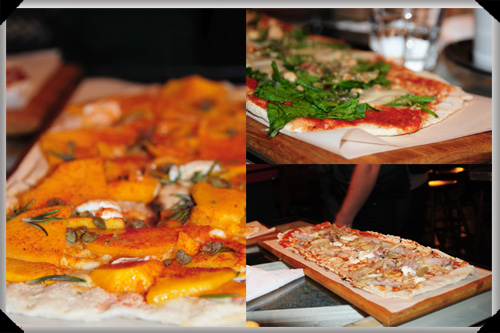 Behind the scenes, the kitchen is small, simple and functional. “I don’t usually let photographers in here,” Joe said, just as I had come in to watch the creation of my potato pizza, the Maria. And granted, there really is nothing flashy about the kitchen space, but that, to me, was neither here nor there. I was more concerned with the progress of my pizza, as it was scattered with slices of potato, mushrooms and mozzarella, and drizzled with truffle oil and cream. I beat a swift path back to my seat once it was ready and got stuck in. At Joe’s recommendation, Skinflint’s chilli-spiked honey, Firebee, was providing a popular finishing touch to pizzas all around the table. 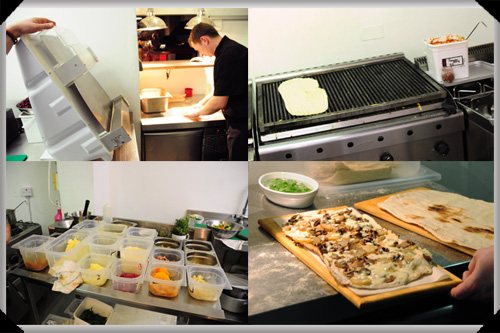 Inside the Skinflint kitchen:
the roller for the pizza dough, the dough on the grill, the array of toppings and the finished Maria pizza

Joe sat with us for a while as we munched, though truth be told, you quickly get the impression that Joe does not sit still for long, if ever. His enthusiasm, drive and inescapable hipness give both energy and style to his various eateries, and he doesn’t show any signs of slowing down. “In the office, we’ll have ten different mood boards with different restaurant themes,” he tells us, and though Skinflint is only newly open, there are exciting plans in the works for parent restaurant Jo’Burger, as well as another new project which he can’t tell us about – so hush-hush, in fact, that even close associates don’t know the details yet. All in all, it’s not the kind of story we’re used to hearing about in these tortured economic times.

“I am a skinflint,” Joe laughs, “and recession sharpens the mind.”

His businesses have to make commercial sense, so they are conceived with a keen eye on cost. Keeping things simple helps – in Jo’Burger, it’s all about burgers, in CrackBird, it’s nothing but chicken, in Skinflint, it’s grilled pizzas that can be turned around very quickly. Acutely aware, too, of the importance of sustaining the local economy, Joe is big on sourcing from Irish suppliers where at all possible – “if you’re not doing that, you may as well forget it.”

Plenty, then, to chew on over lunch and even after the pizzas were long gone – pizzas which, to judge by the satisfied looks on everyone’s faces, had gone down an absolute treat.